Open season for daughters and sons of the Struggle 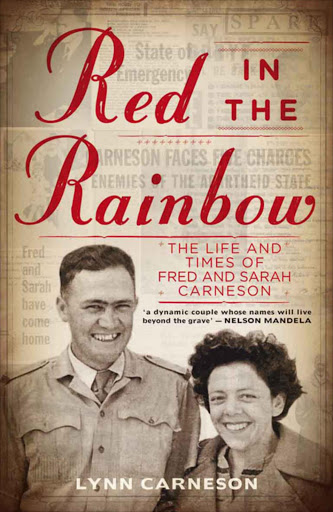 LONDON. Exile. Communists. Books. Join the dots. With memoirs raining down on the reading public, it is open season for the sons and daughters of the Struggle.

An arrow of somewhat deserved narcissism pinpoints a man seated several rows behind Nelson Mandela in the famous December 1956 picture of the accused in the Treason Trial.

His name is Fred Carneson. Imagine the flood of copy if all 156 of these high treason accused - the dead and the living - were to write their own stories!

Lynn Carneson, daughter of Fred and Sarah Carneson, has just written a book about her parents titled Red in the Rainbow.

What else could she have tagged a book on committed communists?

Another new and aptly titled book has just come from the pen of Rica Hodgson, now 89. It is called Foot Soldier for Freedom, and brilliantly captures the life of this affable woman whose singular objective in life was to serve the struggle against apartheid.

If you look at how she took care of the welfare needs of the exiles stuck in ANC camps and attended to their needy relatives back in the Motherland, you'd readily agree that Hodgson, who, like the Carnesons, spent virtually all her active years in London, was quite a dedicated low-level follower.

She suffered no delusions of grandeur in so far as leadership was concerned, preferring instead, to serve the leaders quietly in the background, most notably as Walter Sisulu's secretary on her return to the country.

The story of Eleanor Kasrils is also in book form: The Unlikely Secret Agent, authored by her husband, Ronnie.

The title of the book captures the life of a woman who, when she sneaked out of a Pietermaritzburg mental asylum into exile, was disguised as a nurse.

Where Hodgson excelled as a fundraiser, Eleanor Kasrils achieved the same at disguise, tutoring many ANC cadres the art of evading capture in their missions into apartheid South Africa.

This exile community was a close-knit family, crisscrossing into each other's lives and homes in London and other capitals of the world where ANC work took them.

Though no new book on her is out, Ruth First, the slain wife of another unrepentant communist Joe Slovo, was an indispensable cog and personal friend to Hodgson and others.

If the writing trend is anything to go by, a book on Hilda Bernstein will soon hit the shelves near you.

Another literary flavour of the moment is David Beresford's Truth is a Strange Fruit: A Personal Journey Through the Apartheid War. It tells the story of one John Harris, "the only white man hanged for a political offence during National Party rule".

The so-called "mad bomber", Harris was executed for bombing Joburg's Park Station in 1964.

The book's only link to the UK is that South African-born Beresford would later settle there.

The freedom fighters have said their say. Isn't it time scums like Joe Mamasela shared the stories of their lives too, gory as they are?