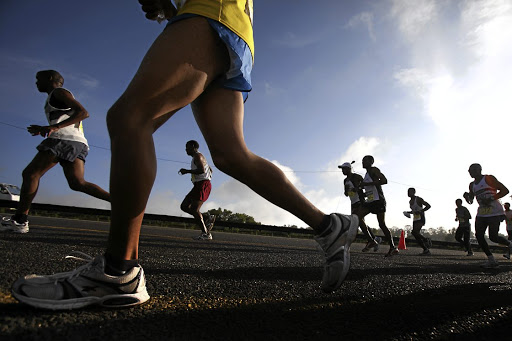 Running should not be expensive, says the writer.
Image: Halden Krog

Running shoes are getting more expensive with no scientific proof about the benefits these structured shoes are said to have.

The middle class is thirsty for fitness and wellbeing and are like prey for the big sports brands just waiting to pounce.

There is a new marathon shoe every year, costing no less than R2 000 on average.

Shoe manufacturers add more gimmicks just to get an edge over their competitors, but there's been no proof that these gimmicks help prevent injuries.

In his book, Born To Run, Christopher McDougall argues that with the invention of hi-tech running shoes also came the rise in the popularity of physiotherapists in the past 30 years, suggesting that more people are getting injured.

I had a pair of casual sneakers I wore for three years. In the second year I started playing soccer and running in those sneakers.

The only reason I stopped wearing them was because the hole near my pinky was getting bigger and the ventilation it received was not fair on my other toes.

I then started running regularly and used a pair of entry-level running shoes for a year.

During that period, I ran three marathons and a couple of half marathons.

My aspirations of running my first Comrades Marathon were nearly crushed one year when I suddenly felt a sharp needle-like pain on the arch of my foot during a 60km run.

I had run in those shoes so much that the inner soles had my imprints. As my toes and heels dug deeper into the sole, the arch on my foot started touching the sole, causing me pain.

I had used them for a year, for both training and racing. I was told that the general rule of thumb about the lifespan of running shoes is six months or 600-800km. That equates to two running shoes a year and about R3 000 from my pocket.

Running should not be an expensive sport. David Gatebe broke the Comrades record with a shoe costing less than R500.

We have been running barefoot for centuries before we were sold dreams. With what is known as persistent hunting, the Khoisan would chase down a kudu for hours barefoot until the animal collapsed from exhaustion before making the kill.

To this day, the Tarahumura tribe in Mexico can race for days on bare feet or sandals. We were born to run and the oversupport in these shoes is working against what should be a natural landing position of the foot.

Some manufacturers are getting it right and have removed the cushioning; they have gone back to the shoes from the '70s which were thin and light. They must just stop overpricing the shoes.