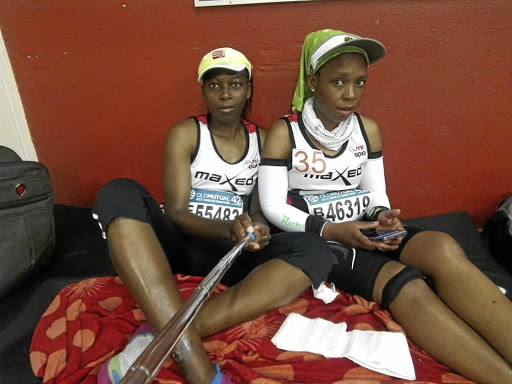 Athletes Lwazi Mbano and Moleboheng Mojakisane get ready for selfies in one of the classrooms during their stay at the Runners Village at Morris Isaacson High School in Jabavu, Soweto.
Image: Supplied

The days of sleeping at filling stations outside FNB Stadium and under trees for many Soweto Marathon runners from provinces outside Gauteng are coming to an end.

The Soweto Marathon Trust has partnered with the historic Morris Isaacson High School in Jabavu, Soweto, and the local taxi association to accommodate 600 underprivileged athletes at the Runners Village at the school.

Athletes from outside Gauteng have in the past slept in cars and nearby filling stations. "We were very pained as organisers to find out that a day before the race athletes were sleeping under trees and storm water pipes and we thought we should do something," said Sello Khunou, who chairs the trust.

The initiative, which started last year, will see runners ferried in taxis from the school to the stadium the day before the race. Supper will be served at 7pm while there's entertainment in the school's hall.

Athletes will then retire for bed in different classrooms provided with mattresses and mobile showers. Breakfast will be served as early as 2am.

Monica Lahle, 41, from Mdantsane Athletics Club in the Eastern Cape was one of the athletes who benefitted last year.

"I had a beautiful experience and we were well taken care of and given free Wi-Fi. My highlight was taking pictures at the June 16 Memorial Acre," said Lahle.

The village hosted many runners who travelled to Soweto for the first time and used the opportunity to visit Vilakazi Street and the Hector Pieterson Museum.

Lwazi Mbano, 32, from Durban said: "I was pleased with the accommodation. There was enough food for everyone. We even got advice on how to tackle the marathon."

School principal Steven Khanyile, who ran the first edition of the marathon in 1992, said the school has always been part of the marathon, with learners lining up to cheer runners as they pass the school on race day.

"We are excited to be able to provide accommodation for the athletes. This partnership adds more value and puts our school on the map," he said.

Athletes have to apply this month to stay at the village. The Soweto Marathon will take place on November 4.

Race organisers declared Irvette van Zyl of Nedbank Running Club as the winner of the Pietermaritzburg leg of the Spar Grand Prix after initial ...
Sport
3 years ago
Next Article