First of funerals for 10 killed at Buffalo grocery held 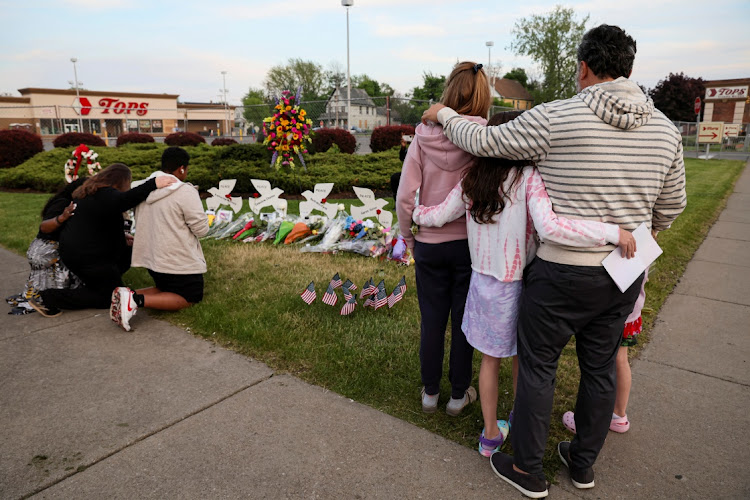 People look at a memorial at the scene of a weekend shooting at a Tops supermarket in Buffalo, New York, US May 19, 2022.
Image: REUTERS/Brendan McDermid

The first funeral is being held on Friday for one of 10 people killed in a livestreamed shooting by an 18-year-old white man at a supermarket in a Black neighborhood in Buffalo, New York.

Friends and family will memorialise Deacon Heyward Patterson, 67, at a private service closed to the media. It will take place at Lincoln Memorial United Methodist Church, less than a mile from the Tops Friendly Markets store where 13 people - 11 of them Black - were shot Saturday by the gunman firing a semi-automatic, assault-style rifle.

Patterson, whom many called Deke or Deacon, was a constant presence at Tops, the lone supermarket in the majority-Black community on the east side of Buffalo, according to Yvonda King, a 55-year-old hair stylist.

A kindly, affable man, Patterson would provide rides to elderly shoppers - "jitneying" in the local parlance - with his car.

"I grew up with him all my life. He would give you the shirt off his back," King said. "He was there every day, helping the elderly get around, or anyone who needs to get around as far as jitneying."

Patterson, the oldest of seven, was born in South Carolina and moved to Buffalo with his family at a young age. He was a husband, a father to three and several grandchildren, the Los Angeles Times reported, citing his wife Tirzah Patterson.

At a Thursday press conference, Tirzah Patterson said she was recently separated from her husband, though they continued to raise their 12-year-old son.

"I need a village to help me raise and be here for my son, because he has no father," she said.

Heyward Patterson served as a deacon at State Tabernacle Church of God in Christ nearby the Tops store. He volunteered at the church's soup kitchen, according to the Times.

Services for some of the other victims are set for next week, while others have yet to be arranged.

Last Saturday's rampage, which authorities said the gunman had carefully planned with an eye toward killing as many Black people as he could, has touched a nerve in a country that has grown accustomed to mass shootings.

The suspect, Payton Gendron, briefly appeared in court on Thursday in a case that has spurred a national debate over the intersection of guns, hate and the internet.

Erie County prosecutors have charged Gendron with a single count of first-degree murder in the massacre. He faces life in prison without parole if convicted on the murder charge.

The FBI has said the shooting is under investigation as a hate crime and an act of "racially motivated violent extremism."