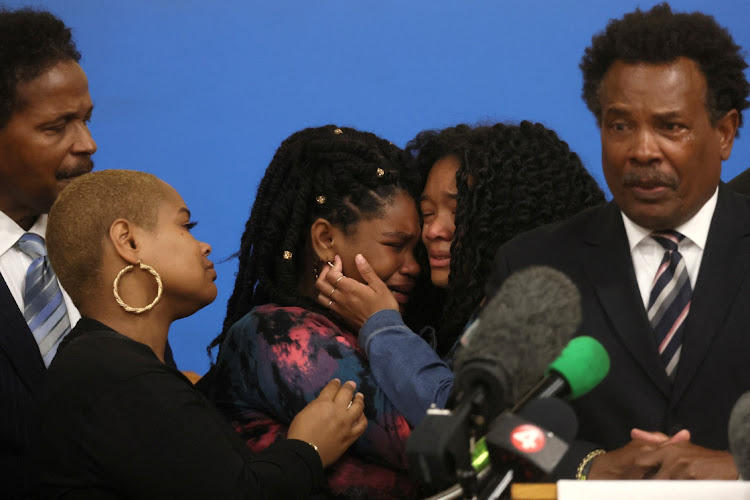 Family members of Ruth Whitfield, who was killed during a shooting at a Tops supermarket, attend a news conference with Attorney Ben Crump in Buffalo, New York, US on May 16, 2022.
Image: Brendan McDermid

President Joe Biden will travel to New York State on Tuesday to console families of victims of a white teenage gunman who targeted a Black community, as the racist violence that inspired his presidential run continues to plague the United States.

Biden will travel to Buffalo, New York, where authorities say Payton Gendron, 18, carried out an act of “racially motivated violent extremism” when he opened fire with a semi-automatic rifle on Saturday at the Tops Friendly Market in a predominantly African-American neighbourhood of Buffalo. He struck 13 people with gunfire, killing 10.

White House press secretary Karine Jean-Pierre said Monday Biden would “comfort the families of the ten people whose lives were senselessly taken in this horrific shooting,” and meet with members of law enforcement and first responders to express gratitude for their bravery.

He will also visit a Tops Market memorial to pay respect to the lives lost, meet local leaders, and deliver remarks at a nearby community center, the White House said.

Biden is expected to decry racially motivated violence and call for new measures to combat it. He told Americans he ran for president to restore the soul of America, following predecessor Donald Trump's failure to denounce a deadly white supremacist rally in Charlottesville, Virginia, and took office weeks after a deadly attack on the U.S. Capitol that included racially motivated groups.

A former police officer, the 86-year-old mother of Buffalo, New York's former fire commissioner and a grandmother who fed the needy for decades were ...
News
2 months ago

But the Buffalo trip will also showcase how little Biden has achieved on stamping out a rise in white supremacist groups or curbing gun violence, with many Republican lawmakers blocking efforts to advance gun control measures and the country suffering a rash of mass shootings in recent months.

A White House National Security Council spokesperson on Monday said the Biden administration was implementing a “government-wide national strategy to counter domestic terrorism, which President Biden directed his national security team to develop on his first full day in office, recognising that has evolved into the most urgent terrorism threat the United States faces today.”

A top FBI official told Congress in November that the bureau was conducting around 2,700 investigations related to domestic violent extremism, and the Department of Justice said in January it was creating a new unit to counter domestic terrorism.

Police on Sunday confirmed that they were investigating Gendron's online postings, which included a 180-page manifesto he was believed to have written outlining the “Great Replacement Theory,” a conspiracy theory that white people were being replaced by minorities in the United States and elsewhere.

An 18-year-old white gunman shot 10 people to death and wounded three others at a grocery store in a Black neighborhood of Buffalo, New York, before ...
News
2 months ago

A white teenager who killed 10 people in a racist attack at a western New York grocery store in a Black neighborhood had been taken into custody last ...
News
2 months ago

Authorities on Wednesday arrested the man suspected of setting off smoke bombs and shooting 10 passengers in a New York subway car, Mayor Eric Adams ...
News
3 months ago
Next Article