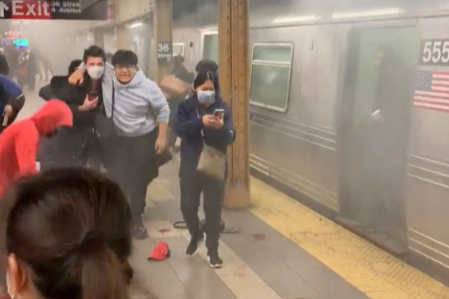 A person helps an injured man after a shooting at a Brooklyn subway station, in New York City, New York, US April 12, 2022
Image: Screen grab obtained from a social media video. Will B. Wylde/via REUTERS

Police mounted an intense manhunt on Tuesday for a gunman who set off two smoke bombs and opened fire in a New York subway car, injuring more than 20 people in a morning rush-hour attack that prompted new calls to fight violence in the city's transit system.

Police said the gunman was believed to have acted alone and immediately fled the crime scene. The attack unfolded as a Manhattan-bound subway train on the N line was pulling into an underground station in Brooklyn's Sunset Park neighbourhood.

Police said 13 more people suffered from smoke inhalation or were otherwise injured in the chaos as panicked riders fled the smoke-filled subway car. Some collapsed to the pavement as they poured onto the platform of the 36th Street station. The fire department said two of those hurt were treated at the scene.

All of the victims were expected to survive their injuries, police said.

New York Police Department (NYPD) Commissioner Keechant Sewell said a U-Haul van believed to be connected to the shooting was later located in Brooklyn, but the perpetrator remained at large several hours after the shooting.

At an early evening news briefing, police named a “person of interest” in the investigation as Frank James, who investigators believed had rented the U-Haul vehicle.

Police said they recovered the key to the van at the crime scene and it had been rented in Philadelphia. James had addresses in Philadelphia and Wisconsin, officials said. Attempts by Reuters to reach any of the phone numbers associated with James were unsuccessful.

The subway assailant was described by police from eyewitness accounts as a man of heavy build, wearing an orange vest, a grey sweatshirt, a green helmet and surgical mask.

The commissioner said the attack began in the train car as it was about to enter the station. The gunman removed two canisters from his bag and opened them, sending smoke throughout the train car.

Police said the man then fired 33 rounds from a Glock 9mm semi-automatic handgun, which was later recovered along with three extended ammunition magazines, a hatchet, some consumer-grade fireworks and a container of gasoline.

Sewell said earlier that the shooting was not immediately being treated as an act of terrorism. There was no known motive for the attack, but investigators found a number of social media posts linked to an individual named Frank James that mentioned homelessness and the New York City mayor, Sewell said.

New York City has seen a sharp rise in violent crime during the pandemic, including a string of seemingly random attacks on its subways. The transit violence has included a number of attacks in which passengers were pushed onto the tracks from platforms, including a Manhattan woman whose murder was seen as part of a surge in hate crimes against Asian Americans.

Six people were killed and 12 injured in shooting on a Sacramento, California, street busy with revelers, and police said they were still searching ...
News
1 month ago

Speaking to CNN, Adams said Tuesday's incident “was a senseless act of violence” and pledged to double the number of officers on subway patrol.

New York Governor Kathy Hochul pledged “the full resources of our state to fight this surge of crime, this insanity that is feeding our city.” The White House said President Joe Biden had been briefed on the incident.

Outside the 36th Street station, in an area known for its thriving Chinatown and views of the Statue of Liberty, authorities cordoned off the immediate vicinity with crime-scene tape, while nearby schools were placed under security lockdowns.

John Butsikares, a 15-year-old who passed through the 36th Street subway stop soon after the incident, said the conductor of another train that pulled into the station ordered everyone still on the station platform to get aboard.

“I didn't know what happened. It was a scary moment. And then at 25th Street (the next station) we were all told to get off. There was people screaming for medical assistance,” said Butsikares, who was going to school.

Brooklyn resident Yayha Ibrahim said he saw people running from the 36th Street station, and decided to walk down into it to see what was happening.

“I saw a lady, she was shot right in her leg and she was screaming for help,” he said. Rescue workers “did a good job of coming quick and fast, and the ambulance came in and they took her.”