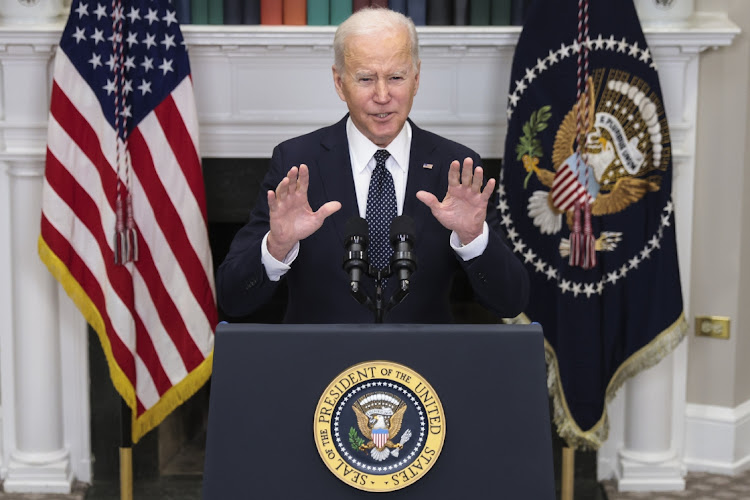 Russia's Vladimir Putin has decided to invade Ukraine within days, U.S. President Joe Biden said on Friday after separatists backed by Moscow told civilians to leave breakaway regions on buses, a move the West fears is part of a pretext for an attack.

In one of the worst post-Cold War crises, Russia wants to stop Kyiv joining NATO and accuses the West of hysteria, saying it has no plans to invade, while the US and allies are adamant the military build-up continues.

Warning sirens blared in Donetsk and Luhansk on Friday after rebel leaders there announced the evacuation of hundreds of thousands of people to Russia.

“We have reason to believe the Russian forces are planning to and intend to attack Ukraine in the coming week, in the coming days,” Biden told reporters at the White House, adding that Kyiv would be a target.

“As of this moment, I am convinced that he has made the decision.”

Late on Friday, Ukraine's military intelligence said Russian special forces had planted explosives at social infrastructure facilities in Donetsk, and it urged residents to stay at home. The Russian Federal Security Service did not immediately reply to a request for comment.

Citing correspondents on the ground, Russian news agencies later reported that two explosions hit Luhansk, one of the main cities in Ukraine's breakaway People's Republic of Luhansk, and a section of a gas pipeline in the area caught fire.

Earlier, separatist leaders in Donetsk and Luhansk issued video statements in which they announced the evacuations and accused Ukraine of preparing to attack both regions soon — an accusation Kyiv said was false.

But at least one of the videos appeared to have been created on Wednesday before the latest flare-up in shelling began, according to metadata, embedded in the footage. That raised suspicions among Western analysts although it can be overwritten.

Asked about the evacuations, White House press secretary Jen Psaki said they were a “good example” of what Washington fears.

“We have ... long predicted for all of you that the Russians would take part in pretexts or steps that would lay a predicate for either war or to create confusion or spread misinformation on the ground,” she told reporters.

Hours after the evacuation announcement, a jeep exploded outside a rebel government building in the city of Donetsk.

Reuters journalists saw the vehicle surrounded by shrapnel, a wheel thrown away by the blast. Russian media said it belonged to a separatist official.

Many families in the mostly Russian-speaking area have already been granted citizenship by Moscow and within hours, some were boarding buses at an evacuation point in Donetsk, where authorities said 700,000 people would leave.

Irina Lysanova, 22, said she was packing to travel with her pensioner mother: “Mama is a panicker,” she said. Her father, Konstantin, 62, was not going. “This is my motherland,” he said.

The evacuation started after the conflict zone saw what sources described as the most intense artillery bombardment for years on Friday.

Ukraine was the most painful loss for Russia of the 14 former republics under its control prior to the 1991 break-up of the Soviet Union.

Russian-backed rebels seized a swathe of eastern Ukraine in 2014, the same year that Moscow annexed Ukraine's Crimea region. Kyiv says that more than 14,000 people have since died in the conflict in the east.

As the Kremlin shows off its military capacity on several fronts, Putin was to supervise exercises of its strategic nuclear missile forces on Saturday.

The effects of nuclear weapons transcend time, and space, poisoning the earth and deforming its inhabitants for generation upon generation.
Opinion
6 months ago

'SHOOTING EVERYONE AND EVERYTHING'

Russia has released footage to show it is withdrawing troops from the border but the US instead believes there has been a ramp-up to between 169,000-190,000 troops, from 100,000 at the end of January.

New helicopters and a battle group deployment of tanks, armoured personnel carriers and support equipment have deployed in Russia, near the border, according to US-based Maxar Technologies, which tracks developments with satellite imagery.

The Kremlin has tens of thousands of troops staging exercises in Belarus, north of Ukraine, that are due to end on Sunday. Belarus' leader Alexander Lukashenko met Putin on Friday, saying beforehand the soldiers could stay as long as needed.

Western countries fear a conflict on a scale unseen in Europe at least since the Yugoslav and Chechen wars of the 1990s, when hundreds of thousands died and millions fled.

The evacuation piled further pressure on Russia's rouble currency and other assets.

A diplomatic source with years of experience of the conflict described Friday's shelling as the most intense since major combat there ended with a 2015 ceasefire. “They are shooting — everyone and everything.”

German Foreign Minister Annalena Baerbock said she did not think a fully-fledged invasion was the most likely scenario but that Russia could carry out a coup in Ukraine, attack critical infrastructure or instigate violence it would blame on Kyiv.

Since toppling a pro-Russian president, Ukraine has staged joint military exercises with NATO and taken delivery of weapons including U.S. Javelin missiles and Turkish drones.

Putin says Ukraine's growing ties with the alliance could make it a launchpad for missiles targeting Russia.

As the crisis deepens, the West is also weighing its non-military options.

Banning Russia from the SWIFT financial system is unlikely to be included in an initial sanctions package in the event of an invasion, a White House official said on Friday, confirming a Reuters report.

How allies should respond to aggressions beyond an all-out invasion is far from agreed, US and European officials said amid differences within the EU.

“Those closest to Russia, such as Hungary, will be against any sanctions short of a military invasion,” according to one senior diplomat.

The teens, tweens and adults of Gen Z are turning to TikTok and Instagram to hash over the tensions between Russia and Ukraine, some appealing to a ...
News
6 months ago

Russia, amid ongoing drills near Ukraine, says ties with US are 'on the floor'

The United States on Sunday said Russia could invade Ukraine at any time and might create a surprise pretext for an attack, as it reaffirmed a pledge ...
News
6 months ago

The next few days could be the most dangerous moment in Europe's biggest security crisis for decades as Russia stages war games in Belarus, British ...
News
6 months ago
Next Article