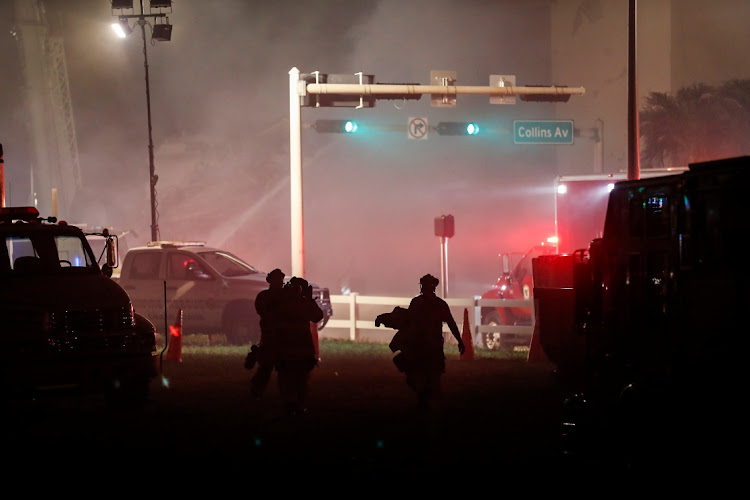 Search-and-rescue operations stretched into a sixth day on Tuesday at the site of a partly collapsed Florida condominium complex where at least 11 people were killed and another 150 were missing and feared dead.

With hopes fading by the hour of pulling anyone else alive from the rubble left when nearly half the 12-floor, 156-unit tower abruptly caved in on itself, authorities held out the possibility that survivors might yet be found.

Families of the 150 still missing were "coping with the news that they might not have loved ones come out alive and still hoping that they will," Miami-Dade County Mayor Daniella Levine told reporters on Monday evening.

"Their loved ones may come out as body parts," added Cava, whose office is overseeing the response to the disaster.

Officials said late on Monday that teams picking through broken concrete, twisted metal and dust from pulverized building materials were still treating the round-the-clock operation - which has employed dog teams, cranes and infrared scanners - as a search-and-rescue effort.

But no one has been extricated alive from the ruins of the oceanfront Champlain Towers South condo in Surfside, adjacent to Miami Beach, since a few hours after one side of the high-rise collapsed early Thursday morning as residents slept.

Fire officials spoke of detecting faint sounds from inside the rubble pile and finding voids deep in the debris large enough to possibly sustain life.

"Not to say that we have seen anyone down there, but we've not gotten to the very bottom," Miami-Dade Assistant Fire Chief Raide Jadallah told reporters on Monday.

The tragedy may end up ranking as the greatest loss of life from an unintentional structural failure in U.S. history.

Two interior walkways collapsed into the lobby of the Hyatt Regency hotel in Kansas City, Missouri, during a party in July 1981, killing 114. And 98 people died when the roof of the Knickerbocker Theatre in Washington, D.C., gave way from the weight of snow during a movie screening in January 1922.

What caused the 40-year-old Surfside high-rise to violently crumble into a heap remained under investigation, but initial attention focused on structural deficiencies identified in a 2008 engineer's report released by Surfside city officials.

That report found severe concrete erosion in the underground parking garage and major damage in a slab beneath the pool deck. The report's author, Frank Morabito, wrote that the deterioration would "expand exponentially" if not repaired.

Ross Prieto, then Surfside's top building official, met residents the following month after reviewing the report and assured them the building was "in very good shape," according to minutes of the meeting released on Monday.

After the meeting, Prieto emailed the town's manager to say it "went very well ... All main concerns over their forty-year recertification process were addressed."

Reuters was unable to reach Prieto, who is no longer employed by Surfside. He told the Miami Herald newspaper he did not remember getting the report.

The condo association president warned residents in an April 2021 letter that visible concrete deterioration identified three years earlier had "gotten significantly worse," along with roof damage, and urged them to pay some $15 million in assessments needed make repairs, The Wall Street Journal and USA Today each reported on Monday.

A month after an engineering report warned of “major structural damage” that required prompt repair in 2018, a Surfside, Florida, official assured ...
News
1 year ago

Searchers worked early on Sunday to find more than 150 missing residents amid the rubble of a Florida condo building that collapsed three days ago as ...
News
1 year ago
Next Article