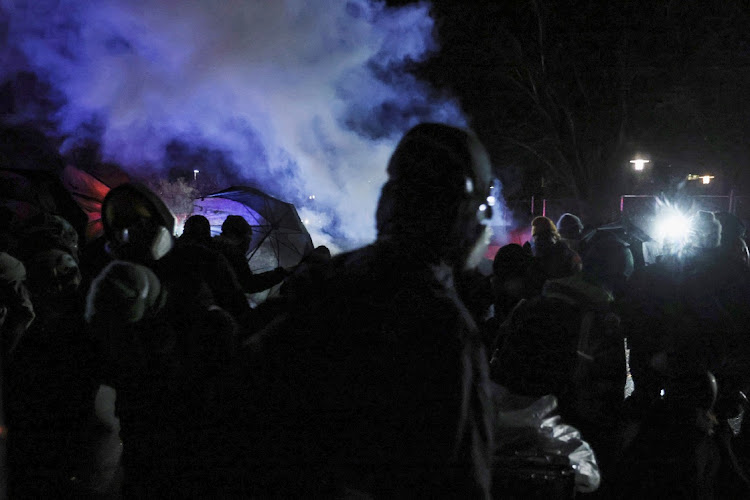 A suburban Minneapolis police officer who fatally shot a Black motorist during a scuffle following a routine traffic stop and the police chief who called the slaying an apparent accident both resigned on Tuesday in the face of civil unrest.

The mayor of Brooklyn Center, Minnesota, said the two quit one day after the chief told a news reporters that the officer who shot Daunte Wright appeared to have drawn her gun by mistake when reaching for her Taser.

Mayor Mike Elliott said the City Council had passed a resolution calling for the dismissal of both Chief Tim Gannon, and the officer, Kim Potter.

"I'm hoping this will bring some calm to the community," Elliott said, adding he had yet to accept Potter's resignation, leaving open the door to firing her. "We want to send a message to the community that we are taking this situation seriously."

Elliott expressed sympathy with protesters, who he said were motivated by fear rather than lawlessness.

Terminating Potter's employment, rather than allowing her to resign, could adversely affect the 26-year veteran's pension and ability to find future work in law enforcement.

The move followed two nights of protests and clashes between demonstrators and police in Brooklyn Center, part of a region already on edge over the trial of Derek Chauvin, the former Minneapolis policeman charged with murdering George Floyd last May.

Floyd, 46, who died in handcuffs with his neck pinned to the street under Chauvin's knee, became the face of national protests againt racism and police brutality that swept the United States last summer.

After nightfall on Tuesday, as snow fell, scores of protesters in Brooklyn Center lobbed bottles and other projectiles over a fence in front of police headquarters.

Officers ordered demonstrators to leave and then advanced, firing tear gas, non-lethal rounds and flash-bang rounds, as the throng dispersed.

Dozens of people were arrested in Brooklyn Center on Sunday and Monday nights amid looting and clashes between activists and police.

The police chief of a Minneapolis suburb where a young black man was shot to death by police during a traffic stop said on Monday the officer in ...
News
1 year ago

'I JUST SHOT HIM'

As the mayor spoke earlier on Tuesday, Wright's relatives and supporters assembled near the Minneapolis courthouse where Chauvin is standing trial, and recounted for reporters the anguish of his death at the age of 20.

Wright, who struggled with a learning disability and dropped out of high school was remembered as a good-natured, loving man who worked multiple jobs to support his 2-year-old son.

Floyd's two brothers appeared at the news conference along with Floyd's girlfriend, Courteney Ross, who embraced Wright's mother, Katie, and said she had once taught Daunte Wright in school.

Wright's deadly encounter began when police pulled him over in his car for what they said was an expired auto registration.

According to Gannon, officers then discovered a warrant for his arrest in their systems. When Wright broke away from one officer and climbed back into his car in an apparent bid to flee, the second officer, since identified as Potter, accidentally drew her pistol instead of her Taser and opened fire, he said.

An autopsy found Wright was struck once in the chest. Potter can be heard on police video shouting: "Holy shit, I just shot him."

The car then rolled away with Wright still in the driver's until it struck another vehicle and came to a stop.

The recollections of Wright's mother and other relatives focused on his last moments.

Katie Wright said her son called her after he was pulled over, and that she offered to mediate with police over the phone. She said she heard police order her son, who seemed confused, out of his vehicle, followed by the sound of scuffling and an officer telling him to hang up the phone.

She said Wright's girlfriend, who was with him in the car, eventually picked up the phone and, amid cries and screams, told her he had been shot.

"She pointed the phone toward the driver's seat and my son was laying there, unresponsive," Katie Wright recalled, weeping. "That was the last time that I've seen my son."

Wright was killed just 10 miles (16 km) from where Floyd died while under arrest for allegedly passing a bogus $20 bill.

Police fired teargas on Sunday to disperse angry protesters after an officer fatally shot a Black man about 10 miles (16km) from where George Floyd ...
News
1 year ago

The medical examiner who performed the autopsy on George Floyd after last May's deadly arrest explained how he concluded the death was a homicide at ...
News
1 year ago

A critical care doctor called as a prosecution witness in Derek Chauvin's murder trial testified on Thursday that George Floyd died from a lack of ...
News
1 year ago
Next Article