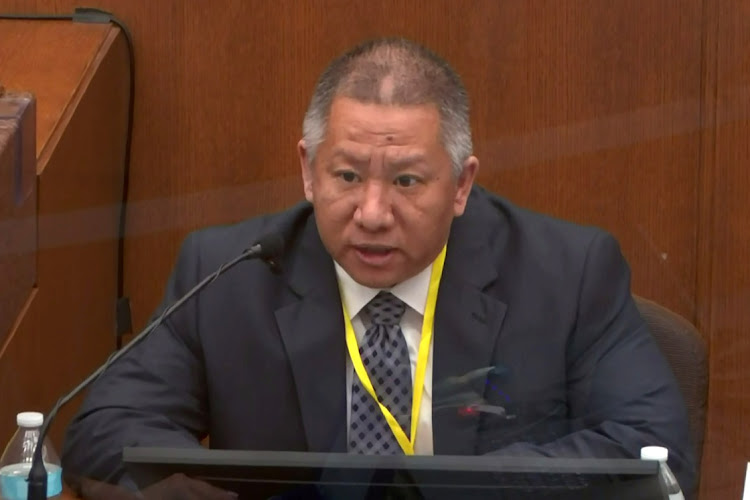 A day after the Minneapolis police chief appeared on the witness stand, jurors in the trial of former officer Derek Chauvin, charged with murder in the deadly arrest of George Floyd, on Tuesday heard from another police witness about training to deal with crisis situations.

The first witness of the day was Sergeant Ker Yang, a crisis intervention training coordinator with the Minneapolis Police Department. Yang testified that Chauvin completed 40 hours of training in how to deal with suspects who are going through crisis.

Yang testified that police are trained in crisis intervention incidents to use principles such as neutrality, respect and trust, and how to spot and interact with suspects who are going through crisis.

Chauvin, who is white, has argued he followed police training when he kept his knee pushed into Floyd's neck for more than nine minutes on May 25, 2020, as the handcuffed 46-year-old Black man fell limp and stopped breathing. The incident prompted protests in many cities around the United States and internationally against racism and police brutality.

Chauvin has pleaded not guilty to murder and manslaughter charges for Floyd's arrest on suspicion that Floyd had used a fake $20 bill to buy cigarettes at a store.

Before the jury was brought into the court, Hennepin County District Judge Peter Cahill heard arguments on a request by a friend of Floyd to quash a subpoena by prosecutors for him to testify.

The friend, Morries Hall, was in the car with Floyd when police arrived, setting the stage for the attempt to arrest Floyd. Hall has said that he would invoke his constitutional right against self-incrimination if he had to appear in the witness stand.

Prosecution witnesses described in searing detail their horror in watching the final moments of George Floyd's life as they testified against Derek ...
News
8 months ago

Chauvin's attorney, Eric Nelson, told Cahill he planned to ask Hall whether he gave Floyd any controlled substances and why Hall left Minnesota immediately after the incident.

Floyd's girlfriend, Courteney Ross, testified last week that she and Floyd struggled with opioid addiction, and that she thought Hall sometimes illegally sold pills to Floyd.

Cahill decided that most questions Nelson wanted to ask could incriminate Hall. Even so, the judge said Hall should be able to testify on Floyd's condition in the car and whether he fell asleep suddenly after possibly taking opioid pills.

"I don't see how that would put him closer to criminal liability, just from those observations," Cahill said, giving Nelson until Thursday to draft potential questions.

The county medical examiner ruled Floyd's death a homicide at the hands of the police, and noted Floyd had also taken the fentanyl and methamphetamine before his death. Chauvin's lawyers argue that Floyd's death was really a drug overdose. Prosecutors from the Minnesota Attorney General's office said medical evidence would contradict that.

Hall attended the hearing via a video link from the county jail, where he is being held on unrelated charges of domestic abuse, according to court and county jail records.

Minneapolis Police Chief Medaria Arradondo on Monday told the jury that Chauvin's training required him to stop the restraint and provide first-aid treatment while waiting for an ambulance to arrive.

"I vehemently disagree that that was appropriate use of force for that situation on May 25," Arradondo testified on Monday.

Derek Chauvin violated Minneapolis Police Department rules and its ethics code on respecting the "sanctity of life" during the deadly arrest of ...
News
7 months ago

Minutes before his death last May, George Floyd looked happy and energetic while waiting to buy cigarettes at a Minneapolis store.
News
8 months ago
Next Article