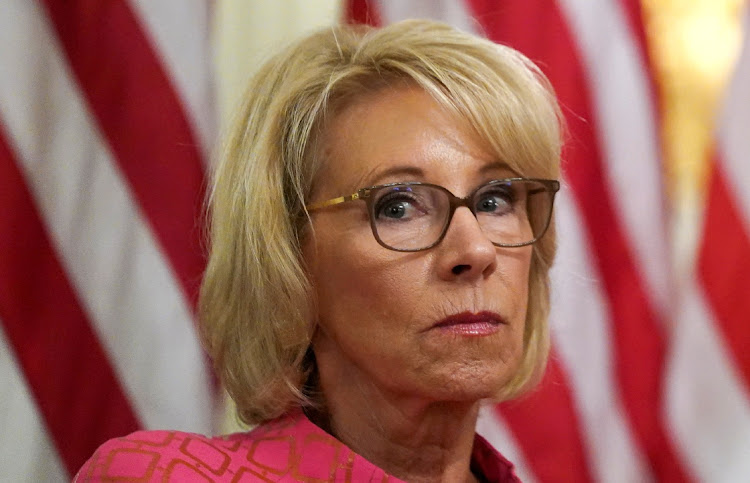 U.S. Transportation Secretary Elaine Chao and Education Secretary Betsy DeVos resigned on Thursday, joining a list of officials quitting President Donald Trump's administration in protest at the storming of the U.S. Capitol by his supporters.

Chao, the wife of Senate Republican Leader Mitch McConnell, said in an email to staff that the mob attack "has deeply troubled me in a way that I simply cannot set aside." She said her resignation will take effect on Monday.

In a letter to Trump, DeVos said the attack on the Capitol was unconscionable. "There is no mistaking the impact your rhetoric had on the situation, and it is the inflection point for me," she wrote, adding her resignation would be effective Friday.

The White House did not immediately respond to a request for comment on DeVos's resignation.

With less than two weeks left of Trump's presidency, many aides were already heading for the door, but the sudden exodus suggested revulsion among some over his encouragement of supporters who brought chaos to the Capitol on Wednesday in an ultimately futile bid to prevent formal certification of Democrat Joe Biden's election victory.

He was followed by Ryan Tully, senior director for European and Russian affairs at the National Security Council, said a second senior official.

The Republican Trump's pledge on Thursday of an "orderly transition" on Jan. 20 was partly intended to head off further resignations, but the second official told Reuters: "It's not going to stop it."

Chao, a labor secretary and deputy transportation secretary under previous Republican presidents, has led the department for four years. In an interview with Reuters on Dec. 31, Chao said she planned to remain through Jan. 20.

On Thursday, she said "we will help my announced successor, Mayor Pete Buttigieg, with taking on the responsibility of running this wonderful department."

Chao made the announcement a day after McConnell condemned the violence and the effort by some Republican lawmakers to block certification of Biden's victory. Trump has sought unsuccessfully to overturn the results with unfounded claims of widespread voter fraud.

Mick Mulvaney, a former White House chief of staff, resigned as special envoy to Northern Ireland, telling CNBC: "I wouldn't be surprised to see more of my friends resign over the course of the next 24 to 48 hours."

John Costello, deputy assistant secretary at the Commerce Department, announced his departure in a blistering tweet, writing, "yesterday's events were an unprecedented attack on the very core of our democracy - incited by a sitting president."

Further departures were likely at the NSC, one of the officials said. It coordinates foreign policy and maintains contacts with other governments, so loss of key staff could raise questions about national security as the new administration takes over.

"A strong national security team remains in place at the State Department, the Department of Defense, Treasury, the intelligence community and the National Security Council," the official said, adding that the team had been guarding against any foreign threats prior to Biden's inauguration.

Shortly after Trump appeared to finally acknowledge that Biden would take office, the White House asked its more than 4,000 political appointees to submit letters of resignation by Jan. 20.

A White House official called it part of the normal transition process, but such a request usually goes out weeks before a transfer of power and was apparently held up by Trump's refusal to concede defeat.

The chaos in the U.S. Capitol on Wednesday unfolded after President Donald Trump spent weeks whipping up his supporters with false allegations of ...
News
8 months ago

Trump has increasingly isolated himself, relying on a small group of diehard loyalists and lashing out at those who dare to cross him.

An administration official said "national security officials who are loyal to their oath to the Constitution will be standing watch until Inauguration Day and will then turn over power to the duly elected new president."

There has been no indication Secretary of State Mike Pompeo, a close Trump ally, will resign. But he put daylight between himself and Trump by condemning the mob that overran the Capitol as "criminals".

Former U.S. diplomats said it was unlikely there would be major departures at the State Department, where staffers have long endured Trump's accusations they are part of a "deep state" seeking to frustrate his policies.

But a State Department adviser on Iran, Gabriel Noronha, was fired after tweeting that Trump was "entirely unfit to remain in office."

Pottinger, a former Reuters and Wall Street Journal reporter who left journalism to join the U.S. Marines after the Sept. 11 attacks on the United States in 2001, had served in the White House since Trump took office.

Trump has pursued hardline policies towards China on issues ranging from trade to espionage and the coronavirus, with relations at their worst level in decades.

EXPLAINER | Can Trump be removed from office before his term ends on January 20?

The storming of the US Capitol by supporters of President Donald Trump on Wednesday has prompted calls by some lawmakers to remove him from office ...
News
8 months ago

Four people died and 52 were arrested, Washington D.C.'s police chief said, after supporters of President Donald Trump stormed the US Capitol on ...
News
8 months ago

Twitter Inc, Facebook Inc and Snap Inc temporarily locked the accounts of US President Donald Trump on Wednesday, as tech giants scrambled to crack ...
News
8 months ago
Next Article