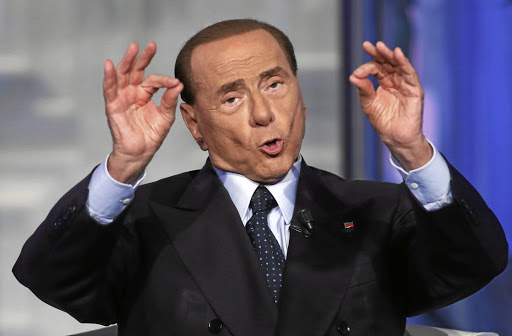 Double, or bilateral, pneumonia affects both lungs and can make breathing difficult. The condition has been seen in many cases of patients hospitalised with Covid-19.

Berlusconi, 83, was taken to Milan's San Raffaele hospital on Thursday evening, two days after his Forza Italia party announced he had coronavirus.

"After the appearance of some symptoms, Berlusconi was admitted to hospital as a precautionary measure," Forza Italia said in a brief statement, adding that his condition was "not a cause for concern".

Sky Italia television reported that he was not in intensive care but he had breathing difficulties. Forza Italia declined to give further details, but said the hospital would give a medical update at 4 p.m. (1400 GMT)

Shares in the media company controlled by the Berlusconi family, Mediaset, rose as much as 11.7% on Friday with traders saying the market was speculating about potential ownership changes at the group if Berlusconi's health worsens.

News of the hospitalisation comes on the heels of an EU court ruling on Thursday which weakened Mediaset's position in a legal spat with French investor Vivendi.

Berlusconi underwent major heart surgery four years ago and halted all public appearances after the coronavirus pandemic hit Italy in February, spending the initial two-month lockdown in a villa owned by one of his daughters in the south of France.

He took a coronavirus test after spending part of August at his villa on Sardinia, which has seen a sharp rise in Covid-19 cases in the bustling summer tourism season.

Italy will rush 10,000 student doctors into service, scrapping their final exams, in an effort to help the struggling health service cope with the ...
News
1 year ago

Italian newspapers have speculated Berlusconi might have been infected by two of his children -- Barbara and Luigi -- who were with him in Sardinia and were seen partying on other islands last month. Both have since tested positive for coronavirus.

When his party announced his illness on Wednesday, it said he did not have any symptoms. Berlusconi subsequently spoke via video link to a meeting of supporters on Thursday afternoon and acknowledged he had had a fever, but that it had passed.

"I no longer have fever, nor pain, I want to reassure everyone that I am quite well," he said.

Italy, hit by one of Europe's worst outbreaks of Covid-19, contained the contagion after a peak in fatalities in March and April. But the number of new cases rose in August, with experts blaming gatherings associated with holidays and night life.

OPINION: From Putin to Zuma to Trump, voters put personality over policy

Jacob Zuma, president of South Africa, survived a no-confidence motion in the country’s parliament earlier this week. It was the eighth since he took ...
News
4 years ago

Berlusconi checks in at health farm to lose weight

Italy's former premier Silvio Berlusconi has checked into a luxury health farm to get in shape and take a break from frontline politics, reports said ...
News
7 years ago
Next Article