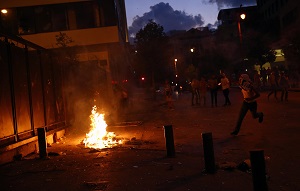 A demonstrator runs near the fire during a protest following Tuesday's blast, in Beirut, Lebanon August 9, 2020.
Image: REUTERS/Hannah McKay

Lebanese protesters hurled rocks at security forces blocking a road near parliament on Sunday in a second day of anti-government demonstrations after the devastating explosion in Beirut last Tuesday.

Thousands of demonstrators were converging on Parliament Square and nearby Martyrs' Square, a Reuters correspondent said. "We want the entire government to leave, we want elections now," demonstrator Yusef Dour said.

The explosion in the port killed dozens of people, injured thousands and gutted swathes of the city. Protesters, already angry over the country's deep economic crisis, have called on the government to quit over what they say was negligence that led to the blast.

"We want to destroy and kill the government. They gave us no jobs nor rights," said Nissan Ghrawi, a 19-year-old unemployed demonstrator.

"The resignation of an MP or a minister is not enough ... the whole government should resign as it is unable to help the country recover," he said in his Sunday sermon.

Information Minister Manal Abdel Samad said she was resigning on Sunday, citing the explosion and the failure of the government to carry out reforms.

Anger boiled over into violent scenes in central Beirut on Saturday. Those protests were the biggest since October when thousands of people took to the streets to demand an end to corruption, bad governance and mismanagement.

About 10,000 people gathered at Martyrs' Square, which was transformed into a battle zone in the evening between police and protesters who tried to break down a barrier along a road leading to parliament. Some demonstrators stormed government ministries and the Association of Lebanese Banks.

One policeman was killed and the Red Cross said more than 170 people were injured in clashes.

"The police fired at me. But that won't stop us from demonstrating until we change the government from top to bottom," Younis Flayti, 55, a retired army officer, said on Sunday.

Nearby, mechanic Sabir Jamali sat beside a noose attached to a wooden frame in Martyrs' Square, intended as a symbolic warning to Lebanese leaders to resign or face hanging.

"Every leader who oppresses us should be hanged," he said, adding he will protest again.

Tuesday's explosion, which killed 158 people and injured more than 6,000, compounded months of political and economic meltdown.

"People should sleep in the streets and demonstrate against the government until it falls," said lawyer Maya Habli, as she surveyed the demolished port where the blast erupted.

The prime minister and presidency have said 2,750 tonnes of highly explosive ammonium nitrate, which is used in making fertilisers and bombs, had been stored for six years without safety measures at the port warehouse.

The government has said it will hold those responsible to account.

The explosion hit a city reeling from economic crisis and the coronavirus pandemic. For many it was a dreadful reminder of the 1975-1990 civil war that tore the nation apart and destroyed swathes of Beirut, much of which has since been rebuilt.

"I worked in Kuwait for 15 years in sanitation to save money and build a gift shop in Lebanon and it was destroyed by the explosion," said Maroun Shehadi.

"Nothing will change until our leaders just leave."