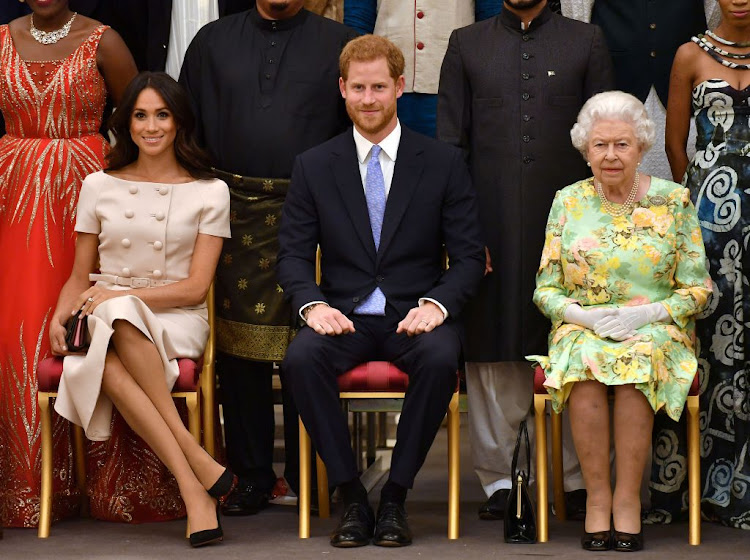 Britain's Queen Elizabeth, Prince Harry and Meghan, the Duchess of Sussex, pose for a picture in London, Britain, on June 26 2018.
Image: John Stillwell/Pool via Reuters/File photo

Prince Harry and his wife Meghan will no longer be working members of Britain's monarchy and they will pay their own way in life as they embark on an independent future, Buckingham Palace said on Saturday.

They will also no longer use their "Royal Highness" titles, the palace said in an announcement that sought to end turmoil in the monarchy sparked earlier this month when the couple announced they wanted to reduce their official duties and spend more time in North America.

The queen and senior family members met last week to discuss the situation and have been in "constructive and friendly" discussions with officials on how this stepping back would work in practice for Harry, 35, and his American wife, former actress Meghan, 38.

"Harry, Meghan and Archie will always be much loved members of my family," Queen Elizabeth said in a statement issued by the palace, referring to the couple's baby son.

"I recognise the challenges they have experienced as a result of intense scrutiny over the last two years and support their wish for a more independent life."

Prince Harry and his wife Meghan will step back from senior roles in Britain's royal family and spend more time in North America, they said on ...
News
2 years ago

The queen said she was "particularly proud" of how quickly Meghan had become one of the family. The couple married in May 2018 in a lavish ceremony at her home in Windsor Castle, west of London in front of a global TV audience of millions.

Harry will remain a prince and the couple will keep their titles of Duke and Duchess of Sussex as they begin a new life split between North America and Britain, but they will not take part in any future ceremonial events or royal tours.

Royal commentators said it amounted to an "abdication" from the royal family and showed that under the warm words, the queen had taken a firm and decisive line.

"It is harder to think of a much cleaner break than this. Harry and Meghan are still members of the Royal Family, but they are effectively no longer royal", the BBC's royal correspondent, Jonny Dymond, said.

Meghan is currently in Canada with Archie and Harry is expected to join her soon.

A palace spokeswoman said the couple would no longer receive public money and that they would repay the cost of refurbishing their cottage in Windsor, which official figures show amounted to 2.4 million pounds (R45m).

It remained unclear what public funds would be spent on their security. Buckingham Palace declined to comment but said there was an independent process to determine public funding for security.

The couple's plans for independence, announced after a long break over the Christmas period in Canada, caught the rest of the royal family by surprise earlier this month and left the queen and other senior Windsors hurt and disappointed, according to royal sources.

However, in a TV interview aired in October, both had made it clear how they were struggling with the immense media attention. Harry said he felt his wife had faced "bullying" from some tabloids.

A friend of Harry and Meghan also said last week the couple felt they had been driven out by some members of the royal family.

It was a busy year for Mzansi with several international stars making their way to our shores.
Entertainment
2 years ago

The changes will come into effect in the spring of this year, the palace said, and there will be further royal engagements before the new arrangement is implemented, although it was not clear whether Meghan would be involved.

The situation will be reviewed in a year's time by senior royals - the queen, Harry's father and heir-to-the-throne Prince Charles and Harry's elder brother Prince William.

There has been intense media speculation in recent days over what exact roles the couple would have.

"As agreed in this new arrangement they understand they are required to step back from royal duties," the Buckingham Palace spokeswoman said on Saturday.

"The Sussexes will not use their HRH title as they are no longer working members of the royal family."

The change means Harry, who served a decade in the British Army, will give up his military patronages and his role as Commonwealth Youth Ambassador.

It was not immediately clear whether the couple could continue to use the "Sussex Royal" title for their website and branding.

While they will no longer receive public funding, Prince Charles will continue to offer private financial support, a royal source said.

The source said the couple will spend the majority of their time in North America, and had not signed any commercial agreements as yet.

Four signs that Harry and Meghan were 'over' the royal life

What could be their next move?
S Mag
2 years ago

"Although they can no longer formally represent the queen, the Sussexes have made clear that everything they do will continue to uphold the values of her majesty," the palace spokeswoman said.

Before their wedding, Harry's spokesman said that Meghan was seeking to become a British citizen, but rules specify that prospective Britons spend the vast majority of their time in the United Kingdom. Buckingham Palace declined to comment on the issue.

"I think the queen has dealt with this crisis because she has absolutely drawn the line: you can be private people, but you cannot be royal at the same time," Alastair Bruce, a commentator on the royals, told Sky News.