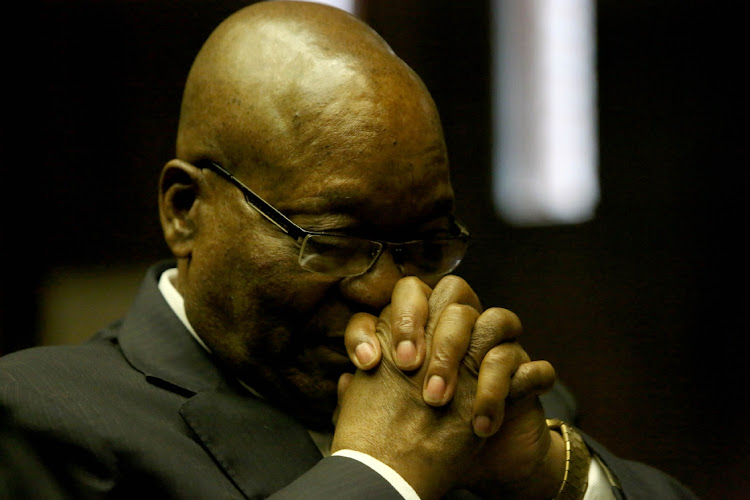 Jacob Zuma was due to appear at a media briefing hosted by his foundation in Johannesburg on June 25 2022, but failed to do so.
Image: Thuli Dlamini

Jacob Zuma, the man at the centre of the Gupta family's capture of the SA state, pulled out of a news conference called to supply his reaction to the findings of the Zondo commission on Saturday.

The 80-year-old Zuma would appear at a media conference at a hotel in Sandton, according to his foundation's invitation.

But when there appeared to be no seat at the table for him when proceedings began almost an hour late.

"He is here ... in the Johannesburg area," he said. "Last night when the decision was taken to respond to the commission, we had had some interaction with the correctional services authorities.

#ZumaBriefing: Mpofu says Zuma has been advised that it's not advisable to address the media under the current parole conditions. "He would have wanted to be here. After this we are going to go back and continue with the consultation." @TimesLIVE pic.twitter.com/6sPj21k7yN

"He is not here because we have advised him not to come due to the parole conditions. Just to take a precaution around that issue.

"We obtained the necessary agreement for him to come here as long as he did not engage with the media.

"This morning, upon our own reflection on the parole conditions and to avoid unnecessary hassles, we advised him that he should not attend.

"He would have wanted to be here. After this we are going to go back to him and continue with the consultation that we were holding."

Duduzile said: "My dad wanted to be here with his favourite people, the media. He does send his greetings to you guys and to everyone watching."

#ZumaBriefing: @JGZ_Foundation spokesperson Mzwanele Manyi has arrived. He has apologized for starting late. He says "the entourage is" on its way. @TimesLIVE pic.twitter.com/qGIFDLw78o

Zuma, who has denied any wrongdoing, testified for less than three days at the Zondo commission before refusing to return. He ignored summonses and a Constitutional Court order to testify, and last June the ConCourt sentenced him to 15 months' imprisonment for contempt.

He was arrested on July 7 but controversially released on medical parole two months later after the then-correctional services chief Arthur Fraser overruled the recommendation of a parole board.

The Pretoria high court rescinded his parole but he remains a free man because his  appeal has yet to be heard.

Chief justice Raymond Zondo, who chaired the four-year commission of inquiry into state capture set up by Zuma while he was still president, delivered his final report this week to President Cyril Ramaphosa.

In it, he said: “President Zuma enabled, indirectly, the members of the Gupta family as businesspeople to occupy a place of prominence over other businessmen, to the detriment of the empowerment legislative imperative of the Republic of South Africa.”

Continuing the media briefing, JG Zuma Foundation spokesperson Mzwanele Manyi called Zondo's report "unlawful" and "irrational" and mounted a savage attack on the chief justice, saying he was not fit even to be a judge.

He began a recitation of Zuma's numerous grievances against Zondo and the commission, many of which have been dismissed in the courts.

Manyi said the “unlawful report of the unlawful commission” was full of innuendo, gossip and conjecture. It was unclear what Zondo had actually done over nearly half a decade at a cost of R2bn, he said.

He said Zuma had briefed his legal team to report Zondo to the Judicial Service Commission and to look into other steps it could take against him, including challenging his appointment as chief justice. The lawyers would also be looking at taking the report on review.

Zuma's statement also attacked President Cyril Ramaphosa, saying he was the first ANC leader to reduce the party's support to below 50%.

Answering journalists' questions after reading the statement, Manyi described Zuma as “a man of the law”.

The former president is appearing at a media conference at a hotel in Sandton, according to his foundation.
News
1 month ago

Ramaphosa will not respond to state capture findings 'at this stage', says presidency

President Cyril Ramaphosa, who was found to have let the country down by not doing enough to fight state capture when he was deputy president during ...
News
1 month ago

It is difficult to accept that former president Jacob Zuma did not have knowledge about the controversial 2013 Waterkloof landing before it happened, ...
News
1 month ago
Next Article