Dozen of Zimbabweans, mostly illegal, in court after foiled robbery in Benoni 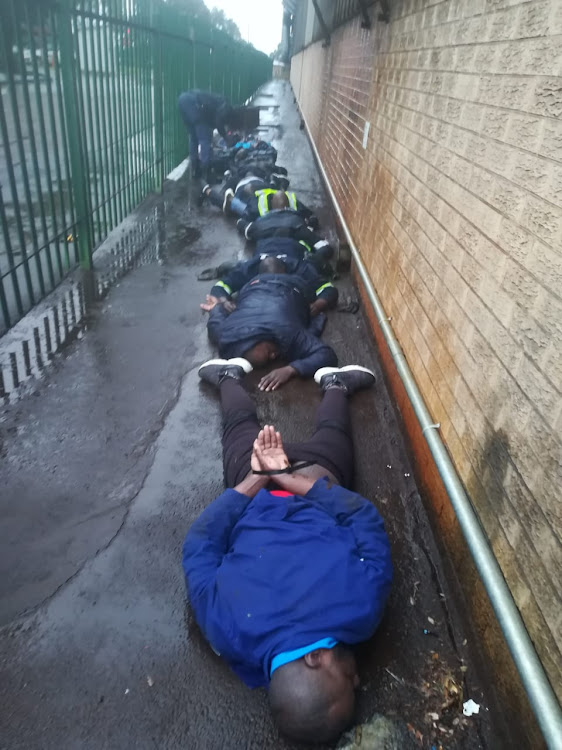 Some of the 12 suspects who were arrested during a foiled robbery in Benoni on April 16. The men are expected to apply for bail on Tuesday.
Image: SAPS

Twelve Zimbabweans who were arrested while allegedly trying to rob a transport company are set to apply for bail in the Benoni magistrate’s court on Tuesday.

On April 16, the police were alerted to a robbery at the transport company in Benoni, Ekurhuleni. Preliminary investigations suggest that about 14 armed men arrived in a sedan and three trucks and held the security guards at gunpoint.

The suspects then hooked up trailers that were loaded with copper. Police and private security guards arrived and intercepted the gang while still on the premises, resulting in a shoot-out and the arrest of suspects.

A thirteenth accused is in hospital after he fell off a palisade fence trying to flee.

Of the 13 accused, only Mlambo is legally in the country. However, Vilakazi and Ngubeni say they possess South African identity documents, though home affairs was yet to confirm this.

The Zimbabwe Republic Police (ZRP) have banned the use of hand-held spikes by traffic officers to stop vehicles believed to be breaking road ...
News
1 month ago

It was a sombre moment for Godknows Nyathi as he was joined by other family members cleaning the spot where his brother was brutally burnt to death ...
News
2 months ago

Zimbabwe and Botswana to set up prisoner exchange

Botswana and Zimbabwe are set to sign a memorandum of understanding (MOU) that will see prisoner exchanges between the two countries.
News
2 months ago

Several Zimbabwean women are allegedly trapped in abusive working conditions as domestic workers under the Kafala visa sponsorship system in Oman, in ...
News
3 months ago
Next Article