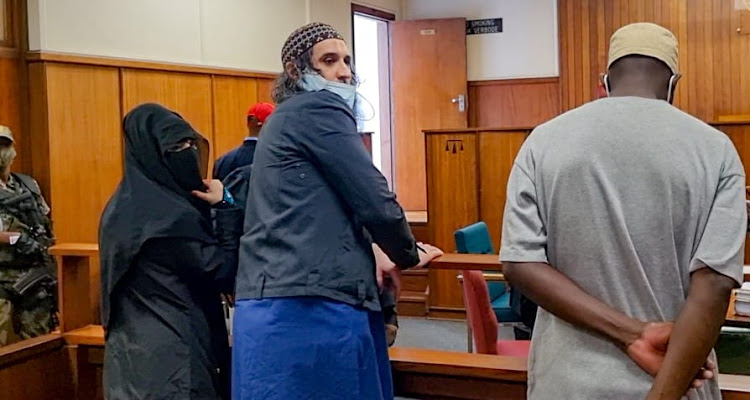 Intimidation and discomfort allegedly sat on the nerves of three alleged Isis acolytes accused of double murder when they appeared in the Durban high court on Monday amid a heavy police and army presence.

There was no shortage of high-calibre weapons when the trial of Sayfudeen Aslam Del Vecchio‚ his wife Fatima Bibi Patel and their Malawian boarder Ahmad “Bazooka” Mussa was expected to get under way in the high court, sitting at the magistrate's court building.

The trio stand accused of the kidnapping and murder of Cape Town botanists Rodney and Rachel Saunders, who went missing in northern KwaZulu-Natal in February 2018.

At the time of their murder, the Saunders are understood to have been searching for rare plants and seeds in the Ngoye Forest.

Aside from murder, they face charges of robbery with aggravating circumstances, theft and malicious damage to property.

A strong police & army presence at the trial of Sayfudeen Aslam Del Vecchio‚ Fatima Bibi Patel and Ahmad Mussa, accused of kidnapping and murdering Cape Town botanists, Rodney and Rachel Saunders in 2018. #ISIS charges of terrorism against the trio have been dropped @TimesLIVE pic.twitter.com/QmVXpwXMNa

They were previously accused of having links to Isis and charged with contravention of the Protection of Constitutional Democracy Against Terrorist and Related Activities Act, but the charge has since been dropped.

Balton dismissed their concerns, citing the safety of everyone in court.

“Unfortunately it is not the safety of the two accused in court, but the entire court staff, family members and media. Generally there is always a police presence in trial matters and due to the nature of this matter I cannot heed to your request. It is for the safety and security of everyone.”

Balton's assessment came after previous security risks in the case.

The government is working with its US counterparts to investigate four men, including two South Africans, who have been slapped with sanctions ...
News
3 months ago

Del Vecchio and Mussa were transferred to Ebongweni maximum security prison in Kokstad in 2020 after prison officials said they had uncovered a plot which would jeopardise Westville prison where they were initially held.

Details of taking hostages, using human shields and possibly dying as martyrs were revealed as part of a bold plot to escape from Westville prison.

Del Vecchio, accused of being the mastermind behind the murders, smiled and laughed when leaving court.

Balton adjourned the matter to Tuesday as the trio's legal teams required time to consult their clients.

The matter has been set down for trial from May 16 to June 17.