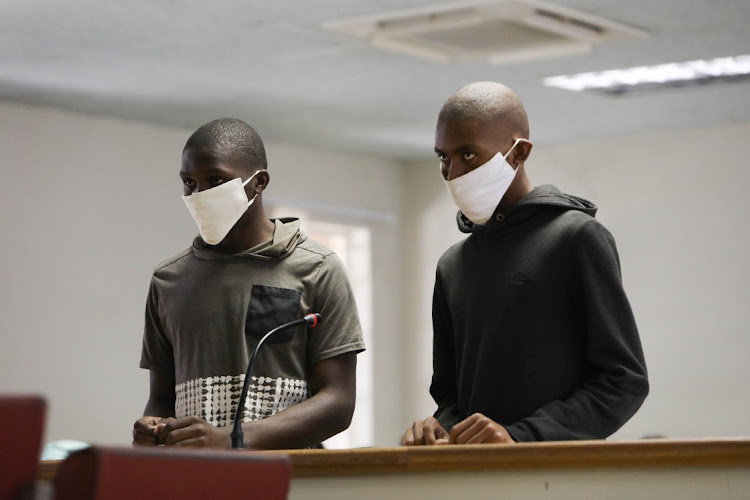 Two men accused of attacking, robbing and murdering an elderly couple at their farmhouse in Levubu near Thohoyandou, Limpopo, appeared in court on Wednesday.

Engetelo Advice Sambo and Mukhethwa Goodman Magoma, both 19, allegedly committed the crime last month and appeared briefly in the Vuwani magistrate's court before magistrate Caswell Ntsane, who postponed the matter to June 30.

They are charged with housebreaking, robbery, murder and arson after Louis Cloete, 74, and his wife Ina, 66, were attacked in their farmhouse before it was set alight with them inside.

The accused were not asked to plead.

Prosecutor Avhatakali Tshikudo asked the court to postpone the matter to allow for  profiles of the accused to be put together and a formal bail hearing.

Magoma and Sambo showed no emotion and did not make eye contact with those in the public gallery of the packed courtroom.

The murder and robbery shocked the Levubu farming community. The robbers ransacked the property and took several items, including firearms and the family's bakkie.

However, after they were spotted they abandoned the bakkie and escaped on foot.

Limpopo police launched a 72-hour activation plan which led to the accused being arrested in Hasani Dakari, a village in the area, a day after the incident.

The couple's son Andries Cloete, who was among those in court, told TimesLIVE he hoped the case would not take three years to be finalised.

Police in Zeerust have launched a manhunt for five suspects awaiting trial who escaped from custody on Sunday morning.
News
2 weeks ago

A mother, her three-year-old son and employee had to hide in the bathroom of their house for close to 15 minutes when armed robbers broke into their ...
News
3 weeks ago

An elderly man whose body was found in a shallow grave in the back yard of his home in Cresta, Johannesburg, was a “very nice chap" whom everybody ...
News
3 weeks ago
Next Article