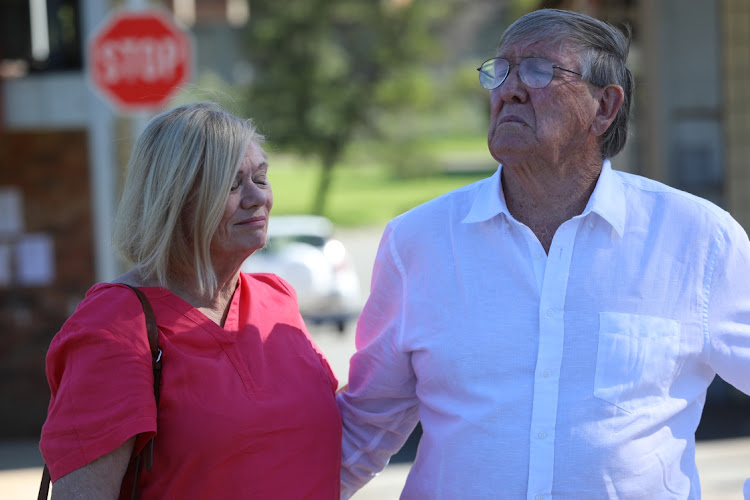 Sharon and Rob Matthews, parents of murdered student Leigh, are opposing a parole application by Donovan Moodley, who is serving a life sentence for her kidnap and murder.
Image: Thapelo Morebudi/Sunday Times

Tensions ran high outside the Johannesburg Medium B Correctional Services Centre on Friday morning, where convicted murderer Donovan Moodley will face the parole board.

After serving less than 17 years of the life sentence he received for kidnapping and shooting student Leigh Matthews with hollow-point bullets, Moodley is entitled to make his bid for freedom.

Leigh’s parents Rob and Sharon Matthews are at the prison and will oppose Moodley’s application.

Appearing tense but determined, the couple were united as they entered the prison gates with their lawyer, Peter van Niekerk of Eversheds Sutherland, and activist Luke Lamprecht of Women & Men Against Child Abuse (Waca).

“We are ready,” Rob said shortly before being called in to the hearing with his wife.

An emotional Sharon said she was hoping the parole board would see reason and understand the feelings of the family, who had undergone such pain and loss and would have to accept that Moodley, who caused their pain, could be allowed his freedom.

“But we will know better how we feel about things once we have had our say and we know the outcome,” she said.

Van Niekerk said his presentation to the parole board would take about two hours.

Sowetan's sister publication the Sunday Times applied to be present on public interest grounds, but were refused for security and protocol reasons.

A large media contingent gathered outside the prison waiting to hear the outcome.

“In our experience, the parole decision will not be made today,” said activist Miranda Jordan of Waca, who was involved in opposing parole for child rapist Bob Hewitt.

Matthews, a Bond University student, went missing from the Sandton campus on July 9 2004, a day after she turned 21. Twelve days after a R50,000 ransom was paid, she was found dead in veld in Walkerville. Her body had been kept in a freezer before being dumped, the trial court concluded.

Moodley was arrested by SA supercop Piet Byleveldt. He was sentenced to life in prison in August 2005.

Four arrested for ‘kidnapping and murder’ of Bangladeshi national in Vanderbijlpark

Gauteng police have arrested four foreign nationals who were allegedly behind the kidnapping and murder of a Bangladeshi  national in December.
News
5 months ago

The state had opposed bail because of the serious nature of the charges. The accused were also deemed a flight risk and the state feared that the ...
News
5 months ago
Next Article