While nature of substance not officially confirmed, noodle manufacturer says it was an agricultural insecticide 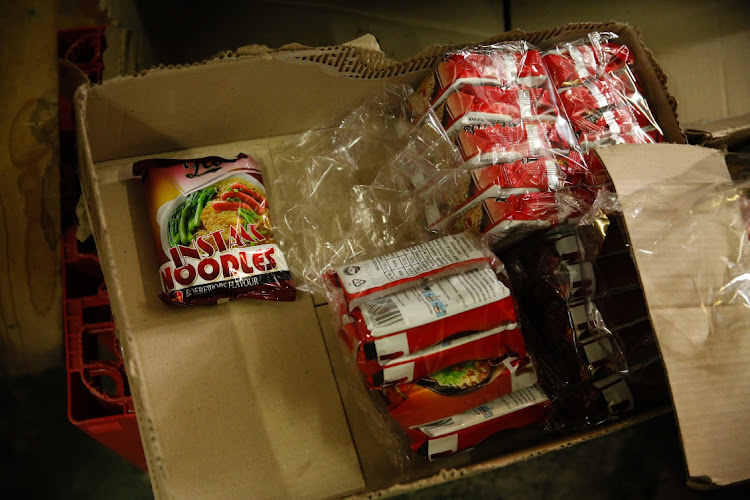 Packets of noodles at the shop in New Brighton which were  allegedly linked to the death of three children.
Image: WERNER HILLS

The manufacturer of Howe Instant Noodles has claimed that three children in the Eastern Cape had somehow digested an agricultural insecticide, resulting in their deaths.

In November, siblings Olwam Ngwendu, seven, and Athenkosi, six months old, and their cousin Sinothando, 11, of Wells Estate, Gqeberha, started having convulsions, vomiting and frothing at the mouth and died after allegedly eating two packets of noodles.

The children allegedly bought the noodles from a spaza shop in New Brighton.

Subsequently, children from Mpumalanga and Limpopo were also reported to have died after eating noodles, spurring an investigation by the department of health.

Manufacturer Grandisync’s attorney, Stuart Laubscher, said in a statement on Monday that the police’s laboratory results showed the cause of the Wells Estate children’s deaths was linked to the agricultural insecticide, Termifos, and not to noodles.

He said the company’s own lab results on the noodles removed from the shop cleared it of any wrongdoing.

The national health department said on Friday it would launch an investigation into possible food poisoning in three provinces after the deaths of ...
News
5 months ago

While police spokesperson Brigadier Tembinkosi Kinana confirmed that the toxicology report was finalised and indicated that the Eastern Cape deaths were caused by poisoning, he did not confirm which substance was to blame.

Kinana said the investigation was under way and once completed the docket would be sent to the inquest court for a decision.

“The investigation is still at a very sensitive stage,” he said.

According to Grandisync, a report due to be released by the National Consumer Council (NCC) would also show the company was not to blame.

In December, the consumer council announced it was investigating Howe Instant Noodles in connection with the deaths.

At the time, acting consumer council commissioner Thezi Mabuza said: “The NCC has commissioned an investigation against Grandisync CC, a supplier based in Uitenhage [Kariega], which supplied the Howe instant noodles.”

Asked for comment on Grandisync’s statement, consumer council spokesperson Phetho Ntaba said it was premature to make any conclusions as the investigations were not yet completed.

“There are other role players such as the police and the department of health that must still be consulted.

“The inspectors have no authority to and cannot clear anyone until an investigation is completed and a full report produced,”  Ntaba said.

Laubscher said the investigation was conducted on December 14 and 15.

He said it showed that Howe Instant Noodles were not connected to the fatalities.

“We can, however, state that during the said investigation, it was established that it was not our product consumed before the fatal incidents.

“Thus our product is cleared in respect of these incidents,”  Laubscher said.

He said the results from their own independent tests proved that their product was safe for human consumption.

However, the tests showed that a curry spice flavour that comes with the noodles included traces of warfarin.

This is a substance that was originally used for poisoning rats but has instead been prescribed as an anticoagulant, a medicine that helps prevent blood clots.

“A single portion of the curry spice containing the warfarin levels as measured would not have resulted in a prothrombin response that could be detrimental to your health,” the report states.

“The metal measured in the curry spice is within expected ranges and would not have an effect on your general health.”

The report also found the pesticide and metal levels measured in the steak chops spice were within acceptable levels.

“[This would] not have resulted in any health side effects.”

How killer Rosemary Ndlovu tried to claim payout from behind bars

It has been two weeks since the sentencing of SA’s most notorious female serial killer, Nomia Rosemary Ndlovu, and information about her devious ...
News
6 months ago

The former police officer on Friday turned around in the court room and told witnesses who testified against her that she would be back for them.
News
6 months ago

Thirty-seven people were taken to hospital on Wednesday night after a suspected  food poisoning incident in Cape Town.
News
7 months ago
Next Article