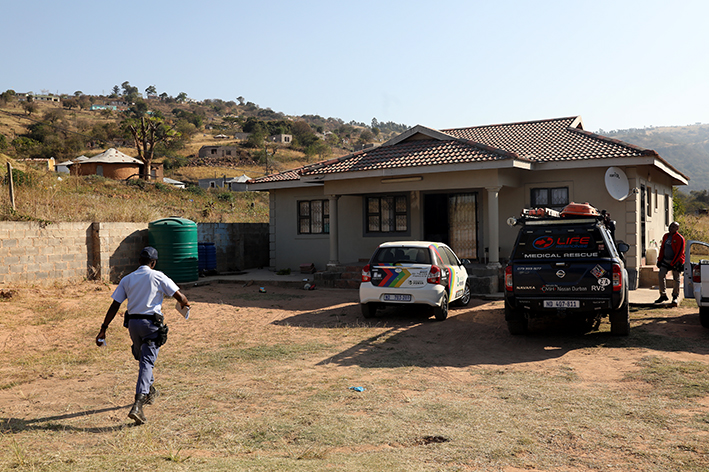 The house in the semi-rural community of Nteke, west of Durban, where two young boys were allegedly poisoned by their father on Monday.
Image: Sandile Ndlovu

A KwaZulu-Natal mother said her two sons are on the road to recovery after their father allegedly poisoned them and himself on Monday.

Speaking  on Wednesday, the mother, who cannot be named to protect the identities of the boys aged 10 and four, said they were doing well.

The two boys and their father were airlifted to hospital on Monday afternoon.

"The oldest is now talking. He recognises me and even remembers what happened that day," said the mother while she was visiting her children in hospital.

She said her husband was also recovering.

Durban children and dad airlifted to hospital after poison incident

Two children and their father are being airlifted to King Edward Hospital in Durban after a poisoning incident.
News
1 year ago

She said on Monday she arrived at her home in Nteke, west of Durban, to find it swarming with neighbours, police officers and paramedics.

"I thought, what would I have been left with without my children? I was not okay that day," she said.

The mother was at work when the alleged poisoning took place.

A relative who spoke to TimesLIVE at the home on Monday said the couple was having marital problems and the family tried to mediate on Sunday.

"It is alleged the father poisoned himself and children," he said.

A 42-year-old father has been arrested for allegedly poisoning his three children and a neighbour's son at Magcakeni locality, Libode, in the Eastern ...
News
2 years ago
Next Article