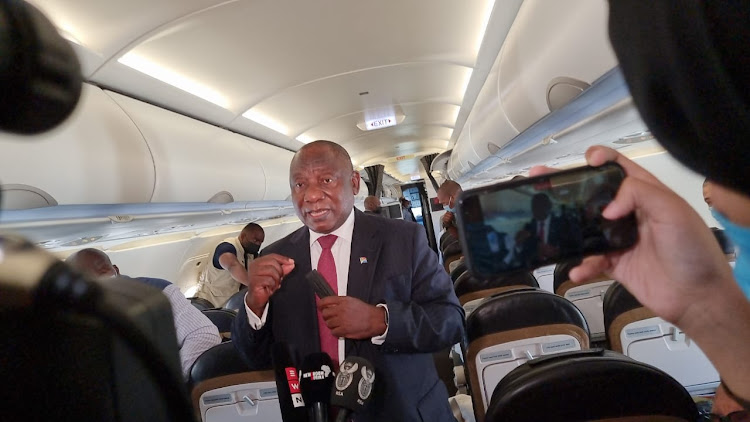 President Cyril Ramaphosa speaks to journalists who have joined him on a week-long tour to Nigeria, Ivory Coast, Ghana and Senegal.
Image: Amanda Khoza/TimesLIVE

“We have been able to get our private sector, who come in their large numbers to Côte d’Ivoire, to form relationships, friendships, and I am hoping that a number of them will move from contact to contract,” he said at the end of his visit to the West African nation on Friday.

Speaking to the media at Pavillon Présidentiel Airport in Abidjan, he said: “Their warmth, hospitality and the reception that we got here in Côte d’Ivoire has just cemented a very strong relationship that is evolving.”

The Abidjan stop followed talks with Nigerian President Muhammadu Buhari — which coincided with the 10th session of the binational commission between the countries.

Ramaphosa honoured with the status of chieftaincy in Ivory Coast

“For us as South Africans to have embarked on this journey to Francophone West Africa to open a market between French-speaking Africa and English speaking Southern Africa is for us a great boon,” said Ramaphosa.

“We are immensely happy. At a diplomatic level we have emerged here with a great deal of success, having cemented a great political relationship with President Ouattara and between SA and Côte d’Ivoire.”

Ouattara will conduct a state visit to Cape Town next year after accepting Ramaphosa’s invitation, “so that we can also show him our hospitality but also deepen our relationship between the two countries at a diplomatic and political level”.

Ramaphosa said the signing of two agreements “is a very good sign and the building of a very strong foundation for future dealings between the two countries”.

More than 100 SA businesspeople “have identified 11 areas around which they would like us to do certain things and they will also like to forge great partnerships with their counterparts”, he said.

Ramaphosa flew to Kotoka International Airport in Accra, Ghana, where he was welcomed by Vice-President Mahamudu Bawumia.

On Saturday he will meet his Ghanaian counterpart, Nana Akufo-Addo, and attend the inaugural session of the Ghana-SA binational commission.

On Sunday, Ramaphosa will lay wreaths at the Kwame Nkrumah Mausoleum at the tombs of the founding father of the AU and Ghana’s first president and the late first lady, Fathia Nkrumah. Later, he will address the SA-Ghana Business Forum and a SA-Ghana fashion show.

President Cyril Ramaphosa and his Ivorian counterpart Alassane Ouattara on Thursday committed to address common problems faced by their respective ...
News
6 months ago

The country presents opportunities beyond its borders as an entry point for investment and a springboard to other countries in West Africa.
News
6 months ago