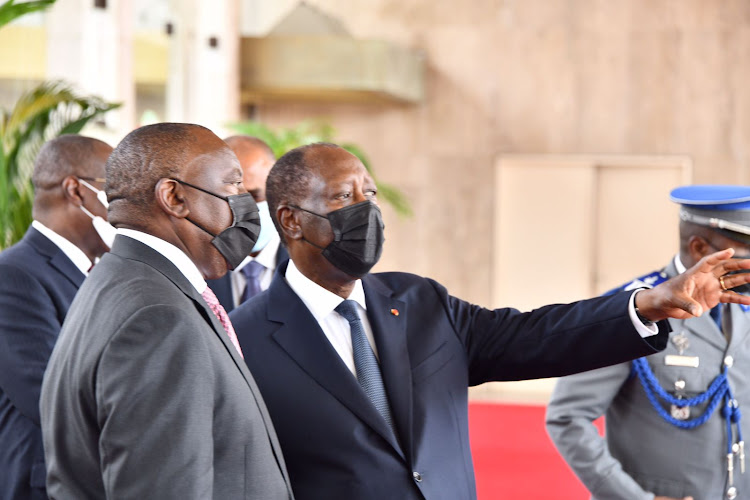 President Cyril Ramaphosa is welcomed by his Ivory Coast counterpart Alassane Dramane Ouattara during a visit on Thursday to Abidjan.
Image: GCIS

President Cyril Ramaphosa and his Ivorian counterpart Alassane Ouattara on Thursday committed to address common problems faced by their respective countries, including poverty, unemployment and inequality.

“Based on the priorities and comparative advantages of both our countries, we have agreed on the need to increase investment in value addition in agriculture and agro-processing and development in the mining sector.

“We are looking to expand trade in petroleum products, fresh produce, retail and agricultural products, and to explore opportunities for medical and educational tourism,” said Ramaphosa.

Ramaphosa is on a West African tour to Nigeria, Ivory Coast, Ghana and Senegal. Ivory Coast was his second stop after Nigeria, which marked the 10th session of the SA-Nigeria bi-national commission.

SA investment in Ivory Coast is growing rapidly. A number of SA companies, including major banks and telecommunication companies, are operating in the country.

"Several of our state-owned enterprises are negotiating investment promotion activities in sectors such as oil and gas, mining and geoscience,” he said.

“By increasing economic co-operation, we are looking to address our common challenges of poverty, unemployment and inequality, with a particular focus on empowerment of women, youth and people with disabilities.”

On Covid-19, Ramaphosa emphasised the need for “an urgent and effective” recovery. He thanked Ouattara for going ahead with the state visit despite the travel bans imposed on SA by some countries after the discovery of the Omicron variant.

“The imposition of travel bans on SA and a number of countries in Southern Africa are regrettable, unfair and unscientific. Given that it was our own African scientists who first detected the Omicron variant, it is also a slap in the face of African excellence and expertise.

“These bans will cause untold damage in particular to travel and tourism industries that sustain businesses and livelihoods in SA and the Southern African region.”

Ramaphosa again called for the travel restrictions to be urgently reconsidered and lifted.

Travel bans will cause long-term devastation across Africa, Ramaphosa warns

Covid-19 travel bans will cause long-term damage to national economies across Africa, President Cyril Ramaphosa said on his visit to Nigeria on ...
News
5 months ago

The two presidents also discussed consolidation of democracy on the African continent and the principles of the African charter on democracy, elections and governance.

“We have agreed to work together on multilateral and global issues of mutual concern, including the reform of the UN Security Council,” he said.