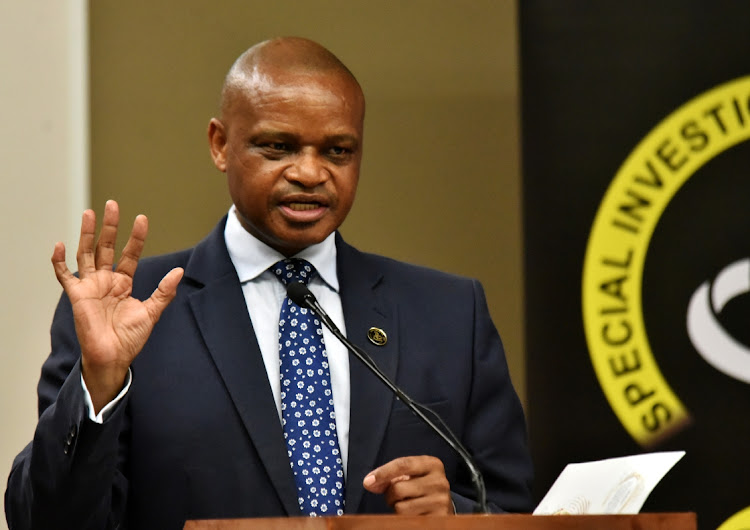 “The investigation reveals an amount of collusion between government (UIF) officials and private companies and individuals. It is very clear that this was an intentional systematic approach by those involved to fleece the monies of the UIF and we are dealing with it accordingly,” said SIU head advocate Andy Mothibi.

Mothibi and his team of investigators briefed the National Assembly’s standing committee on public accounts (Scopa) regarding investigations related to Unemployment Insurance Fund TERS paid during the pandemic.

A lead investigator, who asked to be identified as Mr Le Roux, told MPs that on August 22, minister of employment and labour Thulas Nxesi referred allegations of irregularities involving the UIF to the SIU.

Nxesi requested the SIU to review the auditor-general’s report on findings relating to the TERS paid during the pandemic. The SIU started an investigation ... to review the information or records of the TERS payments.

An aviation industry employee whose salary was cut due to the impact the pandemic had on the industry is struggling to make ends meet following lack ...
News
11 months ago

The Commission for Conciliation‚ Mediation and Arbitration (CCMA) says it was able to save 58‚165 of 138‚816 jobs that were likely to be lost to ...
News
10 months ago

Le Roux said the SIU was able to secure sufficient evidence in support of a national UIF proclamation, which was signed by President Cyril Ramaphosa in April.

“During the investigating period a total of 13,447,006 employees received TERS payments or benefits from the UIF. These employees were linked to at least 1,156,565 companies and employers and a total of R57,384,148,010 was paid out by the UIF since the inception of the scheme.”

The SIU probed government employees, SA National Defence Force staff, inmates and ID numbers of the dead being used to claim from the relief fund.

During phase one the SIU identified at least 6,000 employees within 24 government departments in various provinces.

In the national departments, there were 657 matters in 24 government departments amounting to R114.4m. “These were not people who were unemployed at the time,” said Le Roux.

The SIU also investigated a case involving a Thabo Abel Simbini, a private director in a company called Impossible Solutions. Le Roux said Simbini submitted 6,000 TERS claims to the value of R111m on behalf of his company. A criminal case was opened and Simbini is expected to appear in a Pretoria court on December 5.

On matters relating to inmates, Le Roux said seven individuals who benefited from the TERS were identified. “This relates to identity theft by foreign nationals who used the IDs of incarcerated SA citizens to apply for work with SA entities.”

The SIU is referring these matters to the National Prosecuting Authority and Home Affairs. On the cost of the investigation, Le Roux said phase one, including the 6,000 government employees, is valued at R351m. “The estimated cost to complete the investigation is R40m. This includes the 87 resources (staff) in 10 provinces.”

While MPs lauded the SIU for the work done, Scopa chair Mkhuleko Hlengwa said there were clear system lapses that needed the committee’s attention.

“We need to invite the UIF next week so that we get a broader sense of systems and interventions which are now at play, because inasmuch as we are dealing with the corruption and Covid-19 may have helped to expose the fault lines which ordinarily may have not been receiving the attention that we should [give],” he said.

It will cost the government at least R27bn to fund the R350 monthly temporary grant for unemployed people. “This money is meant to respond to the ...
News
1 year ago

Will the government reintroduce the R350 grant? Presidency clarifies

Acting presidency minister Khumbudzo Ntshavheni said the government has long deliberated on the issue of basic income grants.
News
1 year ago
Next Article