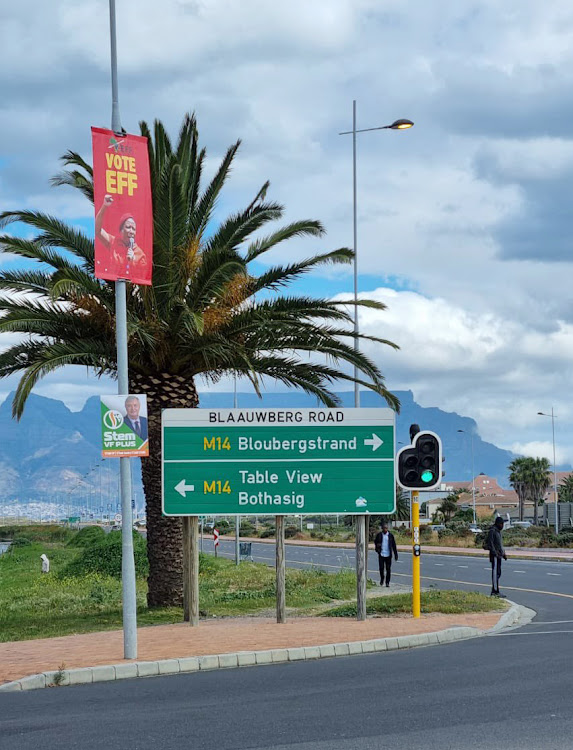 The City of Cape Town had demanded the EFF remove some of its elections banners, saying they flouted bylaws and regulations.
Image: Twitter via @EFF_Cape_Metro

The EFF has won the first leg of its election banner battle with the City of Cape Town after it had been told to remove them for not complying with a city bylaw.

On Tuesday, the high court in Cape Town interdicted and restrained the city from removing the banners. The city has also been found to have contradicted itself in its communication to the EFF as to why it was not allowing the banners.

“The EFF has made a case for the interim protection of its right pending the review of the constitutionality of the bylaw,” acting judge Adrian Montzinger said in a judgment published on Tuesday.

“Pending the outcome of the constitutional challenge in part B of the notice of motion, the City of Cape Town is interdicted and restrained from removing the election banners of the Economic Freedom Fighters within the city metropole,” ordered Montzinger.

The EFF approached the high court on an urgent basis two weeks ago seeking an interim interdict to prevent the city from enforcing a bylaw regulating outdoor advertising and signage by removing its banners.

The party also challenged the constitutionality of the city’s Outdoor Advertising and Signage Bylaw, which it said was irrational and draws an arbitrary distinction between banners for functions and events and banners for electioneering.

Alternatively, the EFF wanted the bylaw to be reviewed and set aside.

The city wrote to the EFF on October 1 informing its leaders that its banners — hung on poles and bridges around the city and larger than a normal poster — were hung in violation of the city’s poster rules. The city requested the EFF to remove the banners by October 3, failing which the city would remove them at a cost to the party.

The EFF and DA ere hoping to emerge victorious after the local government elections on November 1.
News
10 months ago

The city’s Catherine Overmeyer, operations manager responsible for urban management, said the city’s rules for posters during voter registration, general elections and by election processes only catered for posters and not for banners, apply during an official election period and outside that period, standard “Outdoor Advertising and Signage Bylaw rules and fees” would be applicable.

The display of banners on city light poles for political parties to encourage the public to “vote for” a particular political party were not permitted on the city’s light poles, another city official said in an e-mail sent to the party.

Officials argued that schedule 10 of the Outdoor Advertising and Signage Bylaw relates to the display of banners in the City of Cape Town, but these are only permitted for functions or events and does not make provision for electioneering purposes.

The EFF did not abide with the city’s request, refused to remove the banners and approached the court. It argued that section 19(1)(c) of the constitution affords citizens, and by extension political parties, the right to campaign for a political party or cause.

The court agreed, saying the EFF had not only established a prima facie right, but a clear right.

“The EFF has advanced factual allegations that supports how the city’s bylaw will infringe its section 19(1)(c) right and why it needs protection.

“Threatening to remove the banners of the EFF on the basis of a statute that is under constitutional attack threatens the EFF’s right to campaign and will lead to disenfranchisement rather than the opposite,” said the court.

The EFF is thus entitled to protection of its right, it said.

“It is this court’s view, even though a harm analysis is not necessary, that objectively the harm the EFF will suffer from removal of their banners will be irreparable.”

The court said the relief sought by the EFF was strictly necessary and clearly in the interest of justice.

“It is imperative that political parties be allowed to campaign freely within the bounds of the law. Parties like the EFF will be more adversely affected by the city’s bylaw during an election. The bylaw prima facie seems to limit a political party’s ability to use all possible means to campaign for a local election.”

The court said the operation of the bylaw was subsidiary in nature and its operation is only interfered with for a short period of time.

“This must be contrasted with the fact that the city itself allows for a special dispensation during elections in respect of its poster rules.

“Why the same approach cannot apply in respect of banners during an election was not explained. This indicates the interdict sought by EFF will hardly impact the operation of the city over the next three weeks.

“To be allowed to hang banners will allow the EFF to campaign openly and effectively and give an effective expression of the indispensable right to vote and will further promote the objects, spirit and purport of the constitution.”

The court said the city had contended the EFF had an alternative remedy, which was to apply to the city for exemption to comply with the election rules and possibly receive approval to keep hanging its posters.

“This submission contradicts what the city communicated to the EFF on October 5. Firstly, the EFF was never invited to apply for exemption. Secondly, the city’s communication implies the banners will never be allowed. So applying for an exemption would not have served any purpose.

“It is thus apparent the EFF had no other option or alternative but to approach this court. Except for the alleged exemption, the city did not point out any other remedy available for the EFF to pursue to protect its right.”

Poor road infrastructure and persistent shortage of water are some of the problems faced by residents of Moletji-Moshate outside Polokwane in Limpopo.
News
10 months ago

There is no shame in bearing as many children as you want - and even if you cannot feed them yourself, the government will do that on your behalf.
News
10 months ago
Next Article