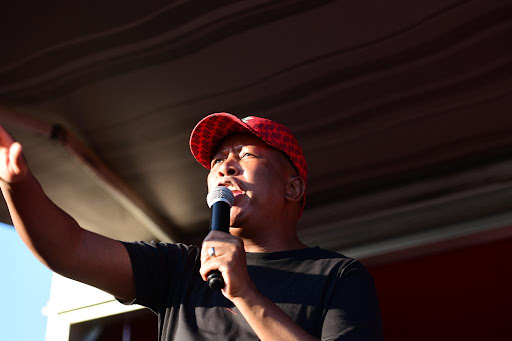 EFF leader Julius Malema says young people of today are lazy because they have only three to four children. He was addressing the community of Ackerville in Emalahleni, Mpumalanga, on Wednesday.
Image: Sixo Gcilishe

There is no shame in bearing as many children as you want — and even if you cannot feed them yourself, the government will do that on your behalf.

This is according to EFF leader Julius Malema, who encouraged unemployed Emalahleni young people to have as many as 10 children each because an EFF government would feed them and pay for their basic education and university fees.

Malema was his usual notorious self — promising honey and milk, this time in Mpumalanga, saying children of poor people would have everything for free when the EFF came into government.

In his view, the young of today were lazy because their grandparents had as many as 10 children each without any social security assistance.

The “laziness” must stop, he said, and young people must reproduce and compete to match their grandparents with many children, because theirs were better circumstances because of taxpayer-funded social welfare.

Any claim that there was no money to pay child support grants was incorrect, charged Malema, who said if the ANC government could blow R500bn Covid-19 relief funds in six months, surely there was money for welfare.

Malema believes that the youth of today must get out of their comfort zone — having as few as three children — because they were worried who will provide for them.

Inside Malema’s retirement plans: I plan to retire at 55 and will lead the EFF for as long as the party needs me

Malema said he does not subscribe to the western definition of political term limits.
News
10 months ago

About 1.5-million R350 grant applicants who chose ‘cash send’ option have not been paid

"As soon as Treasury approves our request, we will pay every cent owed to this category of beneficiaries without wasted time. We empathise with them ...
News
10 months ago

“The grandfathers and grandmothers will tell you they had as many as nine to 10 children per couple without Sassa,” said Malema. “You who have Sassa are boring because you are lazy to reproduce, you have three or four children at most.

“That is too few. Do not be scared to reproduce like our grandparents — there is money, we will look after those children. You must not listen to the urban middle class telling you you cannot have children if you are poor,” he went on. “There is too much money in this country. Just last year they blew R500bn in six months so no-one must come and ask those things of where is the money going to come from,” he said.

Malema said a child born in a poor household is not condemned to poverty for life.

In fact, he said, most children born in poor households are the ones who change the fortunes of their families.

“So no-one must say when you give [birth] children, because you are poor, you are going to die poor. Do not deny the poor an opportunity to have children because the solution to their poverty can be those children.

The onset of the Covid-19 pandemic and associated lockdowns have hit Gauteng hard and forced households to adapt, according to the Gauteng ...
News
11 months ago

The food poverty line increased to R624 in April this year, up from R585 the previous year, Statistics SA said in its release of the National Poverty ...
News
10 months ago
Next Article