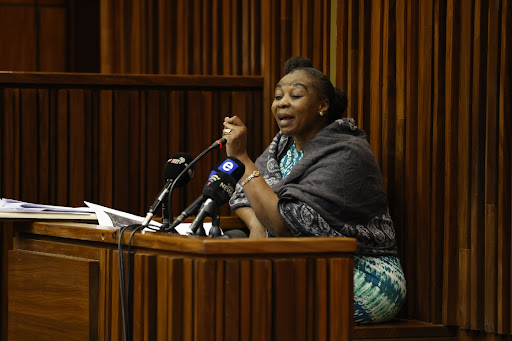 Former cop Nomia Rosemary Ndlovu will know on Thursday if she will be going to jail following a raft of murder charges.
Image: Thulani Mbele

Alleged killer cop Nomia Rosemary Ndlovu will hear her fate in the multiple murder case against her next week after the state and defence made final arguments on Thursday.

Judge Ramarumo Monama will hand down judgment on six charges of murder, conspiracy to commit murder, fraud and defeating the ends of justice, among others, in the South Gauteng high court sitting in the Palm Ridge magistrate’s court on October 22.

The former cop is accused of going on a killing spree that culminated in the murders of her sister Audrey Ndlovu, her cousin Witness Madala Homu, her niece Zanele Motha, her nephews Mayeni Mashaba and Brilliant Mashego – who was Audrey’s son.

She is also accused of murdering her live-in lover, Maurice Mabasa.

The murders occurred between 2012 and 2018 and the state has presented evidence, saying she cashed in life policies after their deaths.

Ndlovu is also accused of ordering hits on her mother Maria Mushwana, her sister Joyce Ndlovu and Joyce's five children.

Prosecutor Adv Riana Williams said in closing arguments that the state proved its case beyond reasonable doubt and that the court should find Ndlovu guilty.

Williams said the only inference that can reasonably be drawn from the facts presented before court is that Ndlovu was behind the offences she is charged with.

“The state presented documentary evidence of the policies, expert evidence, cellphone linkage, a video recording made on the way to Bushbuckridge which contain a confession but also circumstantial evidence,” she said.

Williams argued that the video recorded by an undercover police officer illustrated how Ndlovu’s plans to have her relatives murdered were hatched while the deaths were made to seem unnatural.

“With regards to Audrey Ndlovu, she was not well off and lived in a one room. But she had multiple policies with different companies and the accused [Ndlovu] was listed as the only beneficiary,” said Williams.

“Audrey had a child, Brilliant Mashego, and it is highly improbable that she would not list him as a beneficiary on any of her numerous insurance life policies and instead list the accused.”

The cross-examination of Nomia Rosemary Ndlovu continues in the High Court in Johannesburg.
News
7 months ago

Williams further argued that Ndlovu initially pleaded guilty to conspiracy to commit murder and that she admitted to killing her sister.

Williams said the court should take with a pinch of salt Ndlovu’s testimony in which she said she had numerous life policies because she wanted to take care of her family.

“Her mother and sister testified and they are struggling. This cannot be the case,” she said.

“Due to all the similar facts and 52 witnesses brought by the state were reliable and their versions corroborated and the evidence of the state is credible,” said Williams.

Monama asked Williams what he should make of Mushwana’s evidence, to which Williams responded: “Mothers want to believe in the goodness of their children. The only inference here is that the accused is the perpetrator and should be found guilty.”

Ndlovu’s lawyer Vincent Soko said Ndlovu took out policies for her family members out of the goodness of her heart.

Monama interjected and said good faith could not be used as a defence.

“The state keeps on bringing up the propensity and the links. The accused is the person who was in conjunction with other people who are unknown [in allegedly committing the murder]."

Monama highlighted the patterns which the state identified pointing to Ndlovu’s alleged involvement in the murder charges she faces.

Soko further asked the court to dismiss the testimonies given by the state witnesses, arguing that they were riddled with holes.

Williams responded: “The court cannot overlook the insurmountable evidence against the accused and must be found guilty of all the charges.”

Former police constable Nomia Rosemary Ndlovu had a potentially strong alibi that could prove she was not with her nephew Brilliant Mashego when he ...
News
7 months ago

An emotional interview with alleged killer cop Nomia Rosemary Ndlovu's sister saw the mother of five break down in tears as she spoke about her ...
News
7 months ago
Next Article