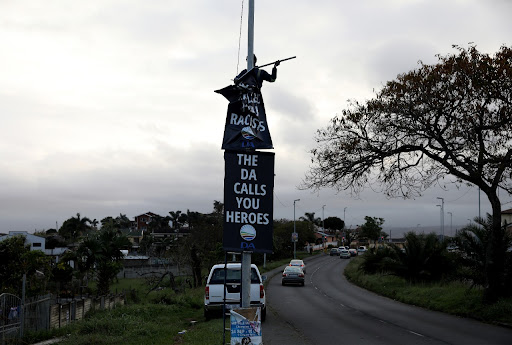 The DA succumbed to pressure and will be taking down its controversial election street posters in Phoenix, KwaZulu-Natal.
Image: Sandile Ndlovu

The DA racists vs heroes posters may have claimed its first casualty - a leader and campaign manager who opposed the party's removal of controversial election street posters in Phoenix, KwaZulu-Natal has resigned.

Mike Waters has allegedly resigned as regional campaign manager and as constituency campaign manager in Ekurhuleni - but he would not confirm it on Sunday, and whether his decision was influenced by the DA's apology over the posters.

At least two senior party members however confirmed the resignation.

Party leaders told TimesLIVE that an announcement was made on Sunday about Waters' resignation where he wished the party well and assured someone who TimesLIVE believes to be a candidate in his ward, that "you obviously still have my vote."

Outgoing Midvaal mayor Bongani Baloyi has become the latest high-profile DA member to slam the decision by the party to put up posters appearing to ...
News
2 weeks ago

His resignation comes after Sunday Times revealed that two days after the party released a statement of withdrawal regarding the posters, he was still questioning fedex directive and confronted colleagues who sit in the national structure.

In a DA Ekurhuleni WhatsApp group the former MP lambasted the fedex decision, saying it only served to help the ANC

.“& now the ANC want to take DA to the HRC [South African Human Rights Commission] because as a political party in SA you are not allowed to criticise the ANC. Well the FedEx assisted the ANC. Gutless FedEx. Every single one of them,” he wrote.

Party members who spoke to TimesLIVE on Sunday said Waters' resignation as campaign manager "21 days before the election was unfortunate".

The controversial posters read: “The ANC called you racist. The DA calls you heroes”. They were put up  in the predominantly Indian community of Phoenix where scores of black people were killed during the July unrest.