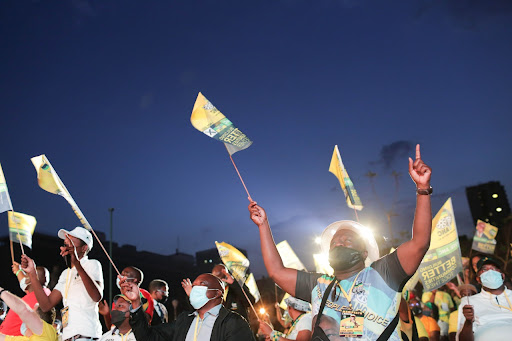 The ANC Youth League (ANCYL) has thrown its weight behind the ruling party’s election manifesto for the upcoming polls, but only if 100 of SA’s 278 municipalities end up being led by young people.

The league is prepared to fight to see this materialise, convenor Nonceba Mhlauli said on Monday evening following the manifesto launch at Church Square in Tshwane.

“As we pledge our support for the ANC and commit to rally people behind the banner of the ANC, we have three non-negotiables as young people. These are that out of the 278 municipalities, we demand 100 of those must be led by young people as mayors, speakers, MMCs [members of mayoral committees] and PMTs [political management team members],” she said.

The league also wants youth development and gendered budgets as a precondition for adoption of the manifesto, as well as skills and capacity to be the foremost consideration for deployment in local government.

“These are non-negotiables that the youth are prepared to go to the bush to fight for. We call on young people of this country to claim their future and join us as we advance the case to build better communities," said Mhlauli.

The ANC is on Monday launching its local government election manifesto at Church Square in Tshwane.
News
10 months ago

The ANC revealed last week that at least a quarter of the more than 10,000 candidates it registered are young people, with the youngest candidate aged 20.

ANC Women’s League (ANCWL) president Bathabile Dlamini said the league would also campaign for the ANC, but demanded that the lives of women change for the better.

“We speak on behalf of women who still live below the poverty line and who are the faces of poverty, but have hope in the liberation movement and its capacity to change the quality of their lives. It is women who have carried the movement all these years. It is in their interest that we say their lives must change for the better because the ANC is a listening organisation.

“Mr President, we stand here to confirm that it is us who constitute the largest membership of the ANC, it is us who are the majority of volunteers who work on the ground to mobilise votes for the ANC. We are here to say we will do so,” she said.

Delivering the manifesto, Ramaphosa made a slew of promises, including that the ANC would prioritise job creation. He said they would end the outsourcing of essential services, which would mean ending labour brokering in municipalities.

Cosatu president Zingiswa Losi reiterated the organisation’s stance that it would wage a relentless campaign for the ANC to emerge victorious in the polls.

“The mandate the membership of Cosatu and workers have given to the federation is to wage a relentless campaign in every ward, every town, every village and every city to ensure the ANC is returned to office on November 1,” she said.

Losi said the federation welcomed efforts undertaken by the party in a bid to clean the rot of state capture, saying this was a positive sign it was turning the tide.

“None of this progress would have been made by any of the opposition parties,” he said.

Nzimande said his alliance sought to see women at the helm at local government level beyond women quotas.

“Lastly, we would like to see an improved working relationship within the alliance.”

“We are here today not only to launch the manifesto but to affirm and declare that come November 1, the City of Tshwane will be back in the ANC’s capable hands. Some have declared they are the government in waiting but in previous years they suffered to get a minimum number of wards.”

POLL | Have you read election manifestos yet?

The EFF, which has already promised voters jobs, free higher education and adequate service delivery, asked the public to contribute to their ...
News
11 months ago

“It is clear from our failure to register candidates that our organisation is in a serious crisis, Cosatu said.”
News
11 months ago

Dishonesty within the ANC kept me from campaigning, says Mbeki

Former president Thabo Mbeki has weighed in on the reasons he repeatedly refused to campaign for the ANC since 2009 as he accused the then leadership ...
News
1 year ago
Next Article