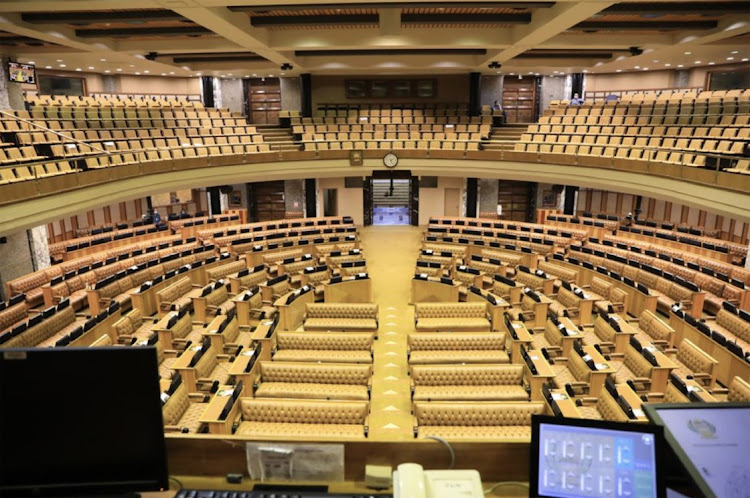 The parliamentary processes on the amendment of the constitution and the impeachment of Western Cape judge president John Hlophe required time to be properly dealt with, said speaker Nosiviwe Mapisa-Nqakula, so both matters will be debated after the elections.
Image: GCIS

Parliament is suspending its programme to allow MPs to campaign for local government elections, likely to be held next month.

“We are suspending the programme until November,” said ANC chief whip Pemmy Majodina yesterday . She explained that no oversight visits and no ordinary portfolio committee meetings will be approved. The only parliamentary meetings that may sit are those that have to meet particular deadlines that are constitutionally binding.

The third term of parliament was initially scheduled to end on September 30. It will now end on Friday.

The National Assembly's programme committee convened a special meeting yesterday after the Constitutional Court order dismissing the Electoral Commission's application to postpone the municipal polls to next February.

Some MPs were not happy to hear that SA will go to elections before the highly contested expropriation of land without compensation matter was concluded.

A parliamentary programme that was circulated ahead of the meeting showed that parliament will rise on Friday and resume on November 1.

“Because we are closing, parliament is rising on Friday, there are matters which we will not be able to deal [with] such as ... the section 25 ad hoc committee [report],” said National Assembly speaker Nosiviwe Mapisa-Nqakula.

She said the parliamentary processes on the amendment of the constitution and the impeachment of Western Cape judge president John Hlophe were quite substantive and required time to be properly dealt with. Mapisa-Nqakula said both matters will be pushed back to after the elections in November.

“Substantive matters should be given time and should be discussed in appropriate forums so that all of us at the end are satisfied with the manner we handle issues of this nature,” she said.

While the ANC's Majodina, her deputy Doris Dlakude and Hope Papo, the parliamentary counsellor to Deputy President David Mabuza, supported the proposal to delay the matters to November, EFF MPs took issue, saying it was important to debate the land expropriation report before the local government elections.

EFF MP Hlengiwe Mkhaliphi bluntly told the meeting that her party wanted to use the report to canvass votes ahead of the polls.

“The land issue in SA is very critical and we want to know what is parliament's stand on expropriation of land without compensation, so as EFF we can go and campaign using that report and say to the people 'you see, these political parties don't deserve your vote'. I suggest [we] deal with it before the adjournment of parliament,” she said.

The EFF was overruled.

MPs were told that the justice portfolio committee was seeking legal opinion on how to proceed on the Hlophe impeachment matter. While the substance of the matter was not up for discussion, the EFF said it would be supporting Hlophe when his impeachment was considered by parliament.

“We are going to defend our own. He is a black judge whom we understand is persecuted under the white arrogance of the judiciary in this country,” said Mkhaliphi.

Her comments drew the ire of the FF Plus's Cornée Mulder, who said they were racist. Mkhaliphi was also told by Mapisa-Nqakula that the platform was not the right one for such comments.

DA leader John Steenhuisen will submit a Promotion of Access to Information (PAIA) application to establish what criteria the correctional services ...
News
1 month ago

Parliament’s joint standing committee on defence has dropped an investigation into allegations of corruption against former defence and military ...
News
1 month ago

President Cyril Ramaphosa has told the ANC NEC lekgotla that the party must be armed and ready to counter perception that his government is corrupt ...
News
1 month ago
Next Article