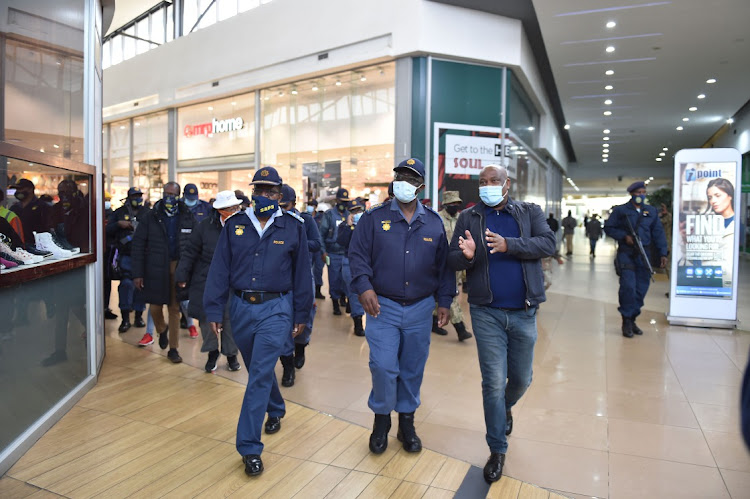 The police and the SANDF responded in large numbers to threats of a national shutdown that circulated on social media. Police patrolled hotspots like Bara Mall, Maponya Mall, Nancefield Hostel and Johannesburg CBD.
Image: Ziphozonke Lushaba

Having learnt from the looting and destruction that took place last month, law enforcement agencies left nothing to chance on Monday amid threats of a national shutdown and deployed thousands of personnel in strategic areas across Gauteng.

Monday was the day on which the so called “national shutdown” was meant to kick-start after several anonymous posters were shared on social media and the Gauteng safety cluster put boots on the ground, ready for any eventuality.

The cluster mobilised taxi associations, members of the Community Policing Forum, the SANDF and communities to be on the lookout for any suspicious gatherings.

Gauteng provincial commissioner Lt-Gen Elias Mawela met with community safety MEC Faith Mazibuko in Protea, Soweto, where an internal briefing was conducted on the readiness for any eventuality.

“This time around we’ve seen private security coming around to support our operation and deployed their air support so that we see exactly what is happening in the province or be informed of any gathering of any mischief which may be happening,” Mawela said.

He was then accompanied by Mazibuko on a visit to some of the identified hotspots, such as Maponya Mall, Nancefield and Bara Taxi rank, where he assured residents that law enforcement was in control of the situation.

Organisers of a 'national shutdown' march planned for Durban on Monday were not able to proceed with the protest action at the eleventh hour.
News
8 months ago

Mazibuko thanked all the sectors of society that joined forces with the police.

“Through you we have been able to establish what is called community intelligence, where we get information and send it to the police for them to respond quickly...This has enabled us to stay ahead of all the developments in different parts of the province,” she said.

Last month, police and the entire security cluster were left with egg on their face when looting took place in Gauteng and KwaZulu-Natal, leaving over 300 people dead.

Monday organisers of a “national shutdown” march planned for Durban were not able to proceed with the protest action at the eleventh hour.

One of the organisers, Mandlenyoka Ntuli, told Sowetan’s sister publication, TimesLIVE, that approval for the protest wasn’t granted in time

“We had a problem regarding the time and deadline. The municipality gives you 21 days to process your application for the march.

“Even though we are marching against the government, we don’t intend to go against the regulations they have put in place or do criminal acts. We did state that the march is going to be a peaceful one.”

Law enforcement was stationed at the proposed start of the march at King Dinizulu Park [formerly Louis Botha Park] in central Durban on Monday morning.

Ntuli said the organisers had decided not to proceed in light of the national government’s response of putting security forces on high alert.

“We also saw the increasing reports of a 'national shutdown'. That means there must have been a misunderstanding between ourselves and the ministers or leadership of the police. The reports made it sound as if there would be looting or burning of property while that is not the case. We did not have those plans,” said Ntuli.

“That is why we decided to go back to the drawing board because we want our march to be peaceful. For now I can only confirm that we have postponed till further notice.”

This comes after a confidential crime intelligence report was leaked that forecast possible looting and other unrest. The report for the eThekwini outer north cluster categorised the impact and probability of the planned protest action in eThekwini as a level 4 risk — major.