Government and police criticised for slow response to looting 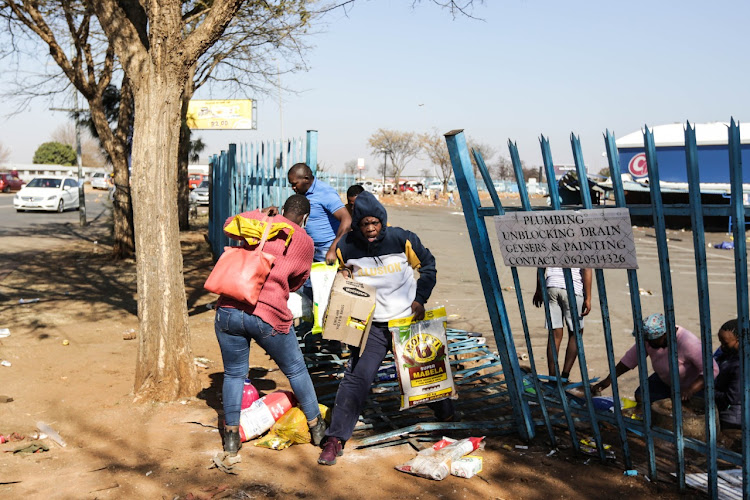 The protests that led to rampant looting were planned to undermine the gains the country made through democracy, said speakers at a briefing held in response to the civil unrest.
Image: Alaister Russell/Sunday Times

The declaration of a state of emergency would destroy the gains SA had made through democracy.

That was the message conveyed by the Defend our Democracy campaign on Thursday — comprised of ANC veterans and business leaders.

“A state of emergency will be counterproductive in defending our democracy. We know what happened under apartheid. We cannot give our rights to people who did not have the urgency to make sure that our properties are protected,” said Thandi Orleyn, who spoke at a virtual media briefing in response to the civil unrest that has engulfed two provinces.

“It’s important we do not call for actions that do not support our democracy.”

Former safety and security minister Sydney Mufamadi said a state of emergency was an appropriate response in a situation where the laws of the country were not adequate to ensure peace and tranquillity.

“In our situation, there is no problem of inadequacy of the laws. The problem is whether those in control of state resources are willing to deploy them for the benefit of the masses,” he said.

He said the recent violence that had played out was “calculated” to silence the courts and government to allow former president Jacob Zuma to get away with his refusal to subject himself to the rule of law.

“It was an early warning signal which ought to have been taken seriously by the government and its security forces. They had ample time to move ahead of the curve.

“Regrettably they chose to sit on their hands and the much-feared ghastly consequences materialised. Even when they did respond, they were slow,” Mafumadi said.

“It’s quite clear this insurrection is planned and is intended to remove a democratically elected government and replace it with the criminal enterprise and those who are refusing to account to the rule of law,” he said.

He called on citizens to unite to protect their communities, malls and businesses.

“We call on people to defend our judiciary. We cannot allow counter-revolutionaries to weaken it. Our constitution must reign supreme.

“The criminals have exposed themselves that to protect their loot, they are willing to go through extreme measures so that they can remain free. It was not normal that when police were called, they took long to respond. That must be investigated.”

He expressed the party’s condolences to the families of those who had lost their loved ones “as a consequence of this mayhem created by this criminal enterprise” .

“We call for the speedy arrest of these individuals.”

Reverend Frank Chikane commended communities that were standing up against the looting of shopping malls.

“We are encouraging them not to act outside the law, but to work with law enforcement to make sure they protect the assets and workplaces. There is failure on the side of the state to act. We need to see more to make sure these criminals do not continue to achieve what they want to achieve.”

He said those who orchestrated the protests should be held to account.

Phillip Taaibosch of the SA National Taxi Council (Santaco) said the role the industry played was to protect its properties and those of the communities it served.

“We have taken a stand that we will not just watch but protect the people who are giving us bread. We will not allow the gains we have made through the democratic processes in the country to be tarnished. We have moved miles from the apartheid days when the industry was pushed back. We will not allow that to happen again.”

Giving a picture what KwaZulu-Natal looked like after rampant looting and violence in the province, Quarrisha Abdool Karim likened the incidents to super-spreaders of Covid-19.

“Of great concern is the disruption of pharmaceuticals and oxygen. Key companies providing affordable medicine were destroyed. There are long lines of people wanting to secure basic supplies. We’ve had an absence of law enforcement.

“The very absence of leadership at a provincial and national level is unacceptable and very telling. I am yet to see the military in central Durban,” she added.

Agri SA has called on President Cyril Ramaphosa to declare a national state of emergency to bring an end to scenes of unrest playing out in parts of ...
News
3 months ago

Business Unity South Africa on Thursday called on government to institute a 24-hour curfew in KwaZulu-Natal and Gauteng areas which have been ravaged ...
News
3 months ago
Next Article