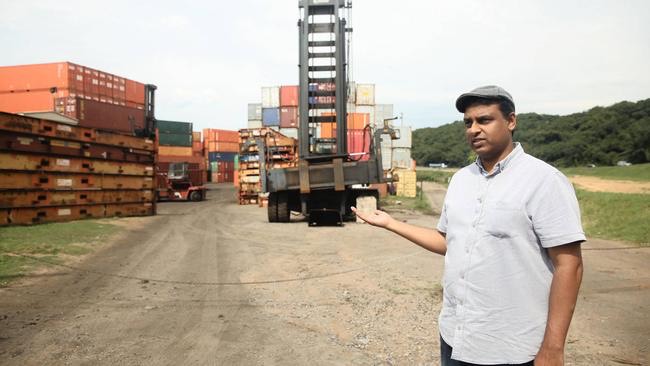 Durban environmentalist Kuben Samie has been given the legal nod to fight for the preservation of an Indian cemetery which has been taken over by a logistics company
Image: Supplied

An environmentalist employed by the eThekwini municipality has secured a small but important victory in his legal battle to rehabilitate an old Indian cemetery used by a freight company to store containers.

Durban high court judge Jacqui Henriques has given Kuben Samie the judicial nod to pursue his legal case, ruling that he has locus standi (legal standing) to litigate.

This was in spite of fierce opposition from the company, Secona Freight Logistics, and the owners of the land in Cato Manor, the trustees of the Cato Manor Indian Cemetery.

In her ruling the judge said Cato Manor, like Sophiatown in Johannesburg and District Six in Cape Town, was an historically significant area where forced removals under apartheid and early formal resistance began.

“The area is important from a heritage and historical point of view. It has many buildings and temples of significance.”

Samie instituted court proceedings in 2017, seeking an interdict to stop the company running its business from the site and an order that the company and the trust fence it off and engage experts to evaluate and assess the damage caused to historic graves, burial grounds, tombstones and the historic crematorium.

He sought a further order that the cemetery be rehabilitated and be declared a heritage site.

Henriques said it was common cause the site was used as a cemetery and housed a now dilapidated and unused crematorium. There were no visible tombstones on the site, only about 1,000 containers.

When the matter came before her for argument, the parties agreed to only deal with a preliminary issue: whether Samie had locus standi, with the trust arguing that he was acting alone, in his private capacity, and not in the public interest.

Samie, in his affidavit, said he knew the site from when he was young and knew it to be an important reflection of the history and culture of the people of Indian origin.

Authorities were working together on Monday morning to gather information on the air pollution caused by a fire that gutted a plastic manufacturing ...
News
1 year ago

At the outset in 2009, when the site was being cleared, he started a Facebook page and vocally campaigned against the damage to the property. He engaged local, provincial and national governments, the police and senior politicians.

In 2017, he started a petition which gained support from a number of people who  indicated they had relatives buried there.

The judge said under the common law, an applicant had to have sufficient, personal and direct interest in the matter. She said he had raised infringements of his rights.

“It is undisputed the site is currently occupied by the company and is being used as a container depot. The land was backfilled for such purpose and waste was dumped there. It would appear there has been infilling of the burial ground and it has been damaged.

“Specific reference was made to a tombstone dating back to 1928 which was found on the property when it was cleared.

“It would appear the removal of graves has not been done in terms of relevant statutory provisions and there has been no written council approval authorising same.”

She said SA courts had held the view that “even a busybody” has locus standi in certain instances.

“In our democratic dispensation, overseen by the constitution and the Bill of Rights, courts are enjoined to foster, promote and advance fundamental rights and values. In my view a court adopting a restrictive and technically obsessive interpretation (of locus standi) not only hampers the development of our law, but also abrogates its duty to promote the constitution.”

Henriques said this did not mean Samie, who is representing himself, would ultimately be successful, and she urged him to seek legal assistance going forward.

Heritage protection body Amafa, one of the respondents, has cautioned it would be a “massive task” to attempt to excavate the graveyard and skeletal remains and try to identify them.

It said apart from the cost factor, the records of the crematorium were destroyed in a fire.