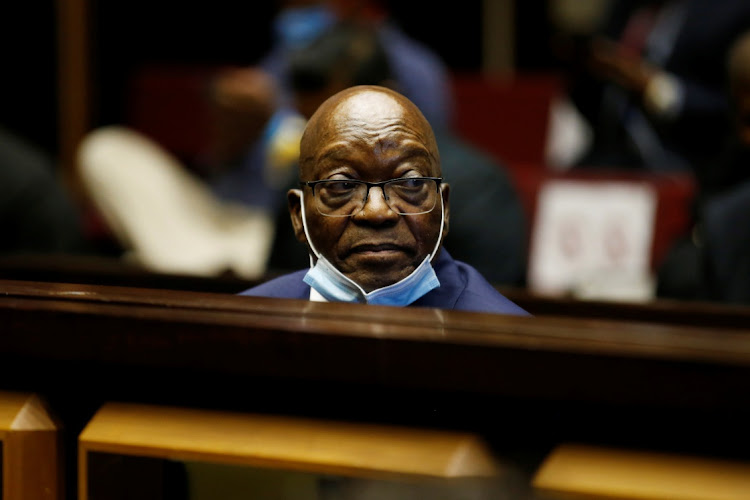 Former president Jacob Zuma sits in the dock after recess in his corruption trial in Pietermaritzburg.
Image: Phill Magakoe

Former president Jacob Zuma will have to pay up to R10m after the Constitutional Court struck from the roll with costs his legal challenge against the personal cost order against him over his attempt to challenge the public protector’s “state of capture” report.

Zuma approached the apex court after his appeal against the 2017 North Gauteng High Court in Pretoria ruling that he personally pay for his failed attempt to review former public protector Thuli Madonsela’s report was dismissed by the Supreme Court of Appeal (SCA) late last year.

In her report, Madonsela had recommended that Zuma appoint a commission of inquiry into allegations of state capture and that it be headed by a judge selected by chief justice Mogoeng Mogoeng.

But Zuma had rejected the recommendation and argued that the report was unconstitutional as he said establishing a commission of inquiry and selecting its presiding officer was his presidential prerogative in terms of the constitution.

The high court however ruled that Madonsela had the power to direct Zuma to appoint a commission of inquiry and to direct that Mogoeng selects its chairperson, as Zuma was conflicted, personally implicated in the allegations of state capture and had personal interest in the outcomes of the inquiry.

No-one is above the law, say leaders ahead of ConCourt decision against Zuma

A group that includes former public protector Thuli Madonsela took a stand during an online rally on Sunday, where they vowed to uphold the decision ...
News
9 months ago

The high court also slapped Zuma with a cost order in his personal capacity, which he unsuccessfully appealed before the SCA.

The SCA ruled that the high court was right in punishing Zuma with the cost order as he had tried to suppress the report before it was published, before he withdrew the interdict at the 11th hour in November 2016.

“It is beyond question that the high court applied the correct legal principles concerning the award of personal and punitive costs. It rightly found that the president could not litigate for the purpose of protecting his own personal interests,” the SCA said.

In his founding affidavit before the ConCourt, Zuma argued that his legal challenge was in the public interest and that the court, as the highest in the land, had to determine whether he had to be personally liable for costs on a punitive scale even though he incurred them “in the pursuit of my constitutional duties”.

The EFF, DA and the Council for the Advancement of the South African constitution (Casac), who had joined the matter as friends of the court, argued for the matter to be struck off the roll with costs as Zuma failed to file heads of arguments and the appeal record.

Deputy chief justice Sisi Khampepe announced that the matter was struck off the roll with costs, which was a further blow to Zuma, who is still fighting against the court order that he pays back about R25m in legal fees which had been footed by the state in his arms deal corruption trial.

The SCA's dismissal of former president Jacob Zuma's appeal against a judgment which ruled that the state is not liable to cover his legal costs has ...
News
9 months ago

Former president Jacob Zuma suffered another court blow when the Supreme Court of Appeal (SCA) in Bloemfontein dismissed his appeal against a ...
News
9 months ago
Next Article