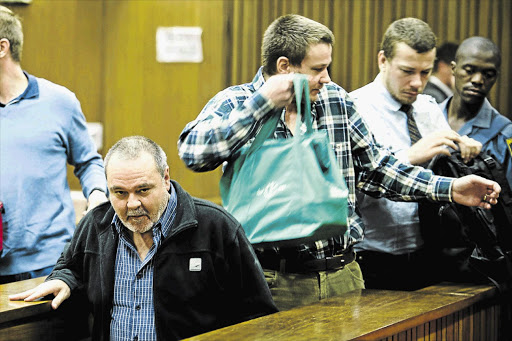 END OF THE ROAD: Boeremag plotters Mike du Toit, Johan Pretorius and Willem Pretorius during sentencing in the High Court in Pretoria . 'This country could have been thrown into chaos,' the judge said at the time.
Image: GALLO IMAGES

One of the Boeremag bomb manufacturers, Kobus Pretorius, and his father, Dr Lets Pretorius, were released on parole last year.

They were both sentenced at the end of the country’s first treason trial under the new dispensation in 2013 following charges stemming from a right-wing plot in the early 2000s to violently overthrow the ANC government. Soweto mother Claudia Mokone was killed when a piece of steel dislodged by a bomb the Boeremag planted on a railway landed in her shack.

Judge Eben Jordaan said Nelson Mandela would have been killed by a landmine planted by the Boeremag bomb squad if he had not gone by helicopter to open a school in Bolobedu, Limpopo.

The bombers already had five large car bombs ready for targets in the city centres of Pretoria and Johannesburg and were planning further bomb attacks when they were caught.

Almost 160 witnesses testified for the state, including several accomplices who became state witnesses after their arrest in exchange for possible indemnity from prosecution.

Pretorius senior, a medical doctor, is reunited with his wife Minnie Pretorius, who stood by his side since the arrests of her husband and three sons around 2002.

Kobus and his father served about seven years of their 20-year jail term.

In 2013, Pretorius told the High Court in Pretoria that he believed he would die in jail because he was a white political prisoner. At the time, Pretorius was giving evidence in an application for bail pending an application for leave to appeal against his conviction on high treason and sentence of 30 years' imprisonment, 10 of them suspended.

“A sentence of 20 years is actually a death sentence for me. I am 67 and will be 87 when I've served 20 years. By that time, chances are good that neither I nor my wife will still be alive,” Pretorius told the court.

According to reports his two other sons, Wilhelm, a theologian, and Johan, also a medical doctor, are still in jail. The two were sentenced to 25 years each for their roles in the acts of treason.

In March, Wilhelm failed in his court bid to get monthly three-hour conjugal visits with his wife. The 41-year-old is being held at the Zonderwater correctional facility in Tshwane, where he has been imprisoned since July 2014.

Kobus broke away from his family halfway through the trial and denounced his parents, blaming them and his upbringing for his crimes and now lives with his spiritual counsellor Sonia Jordaan and her husband.

Boeremag leaders Mike du Toit, Dirk Hanekom and Pretorius, were each sentenced to 30 years' imprisonment, of which 10 years were conditionally suspended for five years.

Rooikoos du Plessis and Jurie Vermeulen, who also played important roles in planning the coup, got 15 years' imprisonment, of which 10 were suspended.

Five of the Boeremag members who played a lesser role, including the youngest member Jacques Jordaan, walked out of the court free men after being given suspended sentences.

Exactly 11 years after a series of homemade bombs rocked Soweto, five of the men were given suspended sentences and the other 14, sentences of in ...
News
8 years ago

"These sentences will hopefully serve as a deterrent to those whose acts undermine or threaten state security," it said in a statement. The ...
News
8 years ago
Next Article