Boeremag 20 to be sentenced 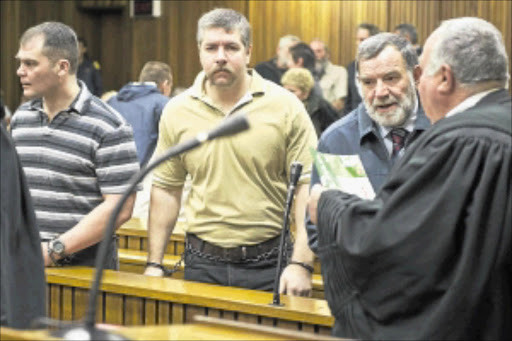 Twenty Boeremag members convicted of high treason will be sentenced in the High Court in Pretoria on Tuesday.

The charge arose from a rightwing plot in the late 1990s and early 2000s to violently overthrow the African National Congress government and chase all black, coloured and Indian people out of the country.

The first of the Boeremag members was arrested before others commenced a bombing spree, attacking among others the police air wing at the Grand Central Airport, and blowing up railway lines, bridges and a Buddhist temple.

Soweto mother Claudia Mokome was killed when the bomb squad blew up a railway line and a piece of steel landed on her shack.

The men also planted a bomb on the road Mandela he was supposed to use on his way to open a rural school, but the plan was thwarted when he arrived by helicopter instead.

The decade-long trial has been one of the most expensive in South African history.

Legal Aid SA said it had spent just over R36 million on the accused's legal costs to date.

On Monday, Judge Eben Jordaan described the personal circumstances of each accused in detail, stressing that their involvement in the case had caused financial ruin, the end of promising careers and also the end of marriages for many of them.

He said Pretorius had ignored warnings that he was busy with unlawful activities and had bullied underlings to become part of the coup plan.

Jordaan rejected Prestorius's claim that the others had misled him, and said he must have understood the consequences of being complicit in the plot.