Be careful what you wish for, ANC cautions advocates for death penalty 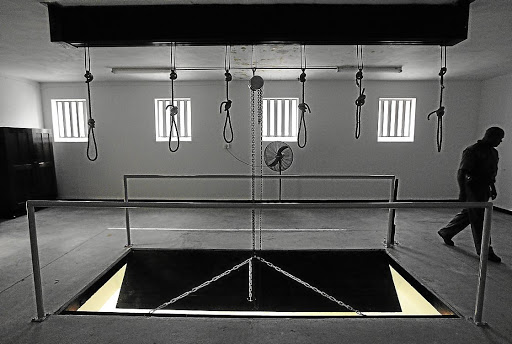 Several people could be hanged at one time at the gallows in Pretoria Central, later renamed Kgosi Mampuru prison. A moratorium on capital punishment was introduced in 1990, and it was abolished in 1995. File photo.
Image: Kevin Sutherland

The ANC has warned those who advocate the return of the death penalty to cease doing so.

This was said by ANC treasurer-general Paul Mashatile and deputy secretary-general Jessie Duarte on Tuesday at the commemoration of the anniversary of the death of freedom fighter Solomon Mahlangu 42 years ago.

They and other leaders visited the gallows at the Kgosi Mampuru prison, where Mahlangu took his last steps before he was hanged.

Mashatile and Duarte said those calling for the hanging of people to be reconsidered should visit the site of the gallows to learn how inhumane the death penalty was.

The debate on bringing back the death penalty often dominates public discourse whenever there is a much-publicised killing of a woman in an act of gender-based violence (GBV), described as “another pandemic” by President Cyril Ramaphosa.

The race for the election of the next Mpumalanga ANC chair is hotting up with more candidates throwing their names in the hat ahead of next month's ...
News
9 months ago

SACP national spokesperson Alex Mashilo says the ANC needs to be united to lead society to freedom.
News
9 months ago

“I think they just need to walk through those gallows for just 30 minutes, then they will understand how cruel the system of death penalty is.

“The death penalty is a very cruel system that takes the lives of innocent people because when you are executed, they cannot say later he should not have been convicted because you are dead.

“On behalf of the ANC, I want us to continue to say no to [the] death penalty.”

Mashatile said the current system was the preferred one because there was recourse and justice for those wrongly convicted if this is discovered while they are already serving their sentence.

Duarte said the rehabilitation system was best and that the country should stick to it.

Any toying with the idea of executing those found guilty of various crimes was a dangerous path back to the dark days of apartheid, she said.

“The story about the death penalty is also about who will die — young and black will die. The course that the SA government has taken of rehabilitation is the correct one, even though it is a difficult course to take because of the anger of the people.”