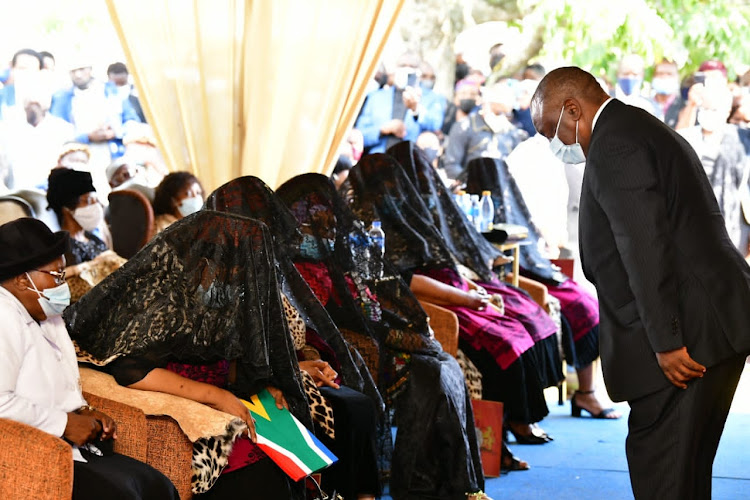 President Cyril Ramaphosa pays his respects to the grieving widows of King Goodwill Zwelithini during a memorial service on Thursday.
Image: Elmond Jiyane

Queen Mantfombi Dlamini has been made regent of the Zulu nation.

AmaZulu traditional prime minister Prince Mangosuthu Buthelezi made the announcement after a marathon meeting of members of the Zulu royal family and the late King Goodwill Zwelithini's lawyers on Wednesday at KwaKhethomthandayo Royal Palace.

Speaking after the meeting, Buthelezi told journalists that Queen Mantfombi becomes the regent in an “interregnum” — until an official successor is named.

“Three months is for mourning, it is for family mourning according to our tradition and she cannot do anything while in mourning, she will be assisted by the royal council in the meantime,” said Buthelezi.

The KwaZulu-Natal Guild of Church Bellringers in Durban rang their bells in honour of the late Zulu monarch King Goodwill Zwelithini on Sunday.
News
8 months ago

A royal succession planning meeting is going ahead with a meeting of members of the Zulu Royal family and the late King Goodwill Zwelithini's lawyers ...
News
8 months ago
Next Article