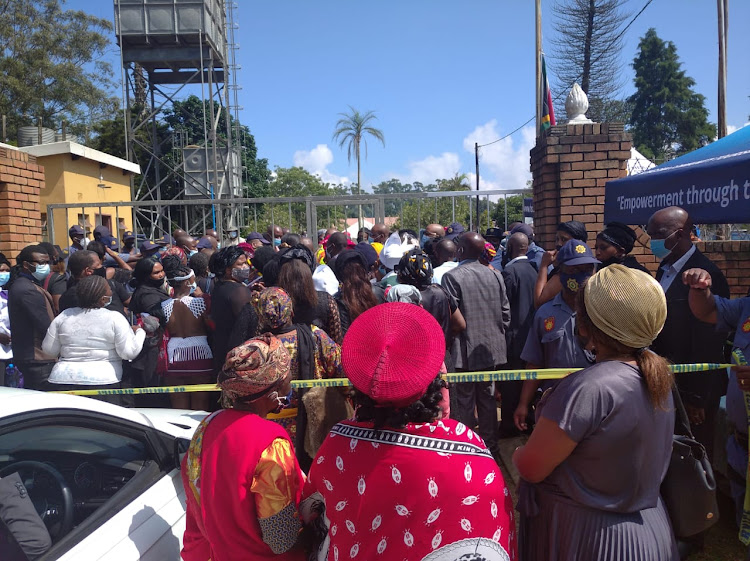 Dozens of people outside the gates of the royal palace in Nongoma where the memorial service of late Zulu monarch King Goodwill Zwelithni was hosted
Image: Zimasa Matiwane

Dozens of people thronged the gates outside the royal palace in Nongoma during the official memorial service for the late Zulu monarch King Goodwill Zwelithini.

“I strongly discourage anyone wanting to come to Nongoma now because there is virtually no space for people other than the prescribed number of people as per Covid-19 regulations. And I would actually advise that people follow the proceedings on their screens because the proceedings are going to be broadcast on all platforms so there is no need for anyone to come here.”

He said according to regulations, only 250 people would be able to attend the outdoor memorial. However, it was still difficult to ensure that social distancing would be adhered to outside the venue.

“I must be honest, it is difficult to control the outpouring of grief and pain that has been demonstrated by people as they are coming in their droves, but we have never tired as leadership to tell people to stay home and watch the proceedings at their homes.”

Mncwango said controlling the crowd gathered at municipal public viewing sites set up at taxi ranks and the town hall, may be easier for the hundreds of mourners to observe social distancing protocols rather than line the streets.

“Law enforcement agencies are all out. Ultimately it is their duty to ensure that the law is upheld. It is also the responsibility of every individual to look after themselves. It is now an individual responsibility.”

Earlier police minister Bheki Cele said it was difficult for the police to control the mourners.

The police contingent stationed at KwaKhethomthandayo royal palace had set up roadblocks amid fears that mourners would descend on the palace in large numbers.

On Wednesday night, dozens of people were gathered outside the royal palace, where amabutho and maidens gave a royal send-off to the monarch, who was buried in a midnight private funeral attended by a select number of male members of the royal family.

The privacy that surrounded parts of King Goodwill Zwelithini’s burial yesterday was normal protocol in how a king ought to be laid to rest as ...
News
4 months ago