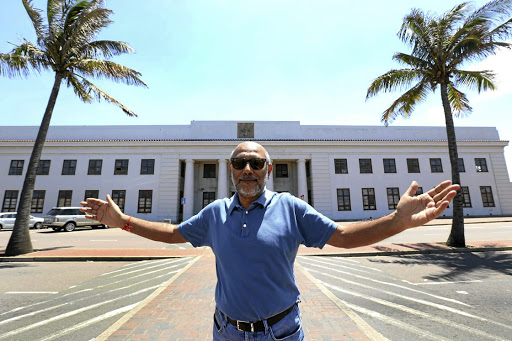 Videovision CEO Anant Singh at the beachfront site where construction on a film studio is finally set to start.
Image: Jackie Clausen

The defence ministry has finally been given its “marching orders” and directed to transfer the prime beachfront “Natal Command” site to the eThekwini municipality, which in turn must transfer it to movie mogul Anant Singh for the development of a film studio.

The municipality sold the 21ha site to Singh’s Rinaldo Investments in a controversial deal in 2003 for R15m.

This was after the SANDF indicated that it would vacate the property by 2009.

But the deal was stalled when Giant Concerts' Sunny Gayadin challenged it in court, a process that took almost a decade with a final ruling by the Constitutional Court that Gayadin had no legal standing to bring the application.

And then, belatedly, the SANDF laid claim to the land again, arguing that it needed it “in the future”, and that it wanted to develop “accommodation and a hotel”, needed by members involved in combating “piracy and other criminal conduct taking place in the Mozambican channel”.

Singh launched his own court action which was opposed by the minister of defence.

In his recent ruling, judge Mahendra Chetty, detailed the history of the site. The then city authority purchased it in 1855 but donated it to the central government in 1937 for military purposes.

It was with the express condition that in the event of it not being used, or required, for defence purposes, it would revert back to city ownership.

Chetty said the army had moved off the land in 2009 and, in 2015, the minister of public works had approved the transfer back to the municipality.

And then in April 2017, almost 14 years later, the department indicated that it still required the property for defence purposes moving forward.

More than a decade after the army marched off the property, it lies vacant and nearly all the buildings have been demolished. Only a shell remains as a facade of the headquarters building.

“The present position is that more than a decade after the army marched off the property, it lies vacant and nearly all the buildings have been demolished. Only a shell remains as a facade of the headquarters building, together with the walls of a church. Both appear to be protected in terms of heritage legislation.

“Because of the stance of the SANDF — that it intends to use the property when it has the necessary funds —  the municipality has been unable to take transfer of it and unable to honour its obligations to Rinaldo.”

The judge took aim at an affidavit written by a Lt-Gen Mbuli, who when faced with “an overall mosaic of correspondence and factual occurrences spanning more than decade”, insisted that those who had penned the letters had no authority to do so.

“I can only assume that this strategy has been embarked on out of desperation to bolster what are otherwise flimsy grounds of opposition,” he said, noting that the general himself, had not put up any authority to show that he was speaking on behalf of the minister.

He said Rinaldo had spelt out the prejudice it was suffering and it could  “hardly be in the interest of both the municipality and the province for a valuable tract of land to lie vacant without generating any revenue”.

“To enhance its point, the application points to another development which commenced around the same time it concluded the agreement for the sale of the property. That development, known as The Pearls, was constructed at a cost of about R3.5bn securing revenue generation for the city of almost R40m per annum.”

The judge said lawyers for the minister had asserted that the initial donation of the land must have been to bolster the government between the periods of the first and second world wars.

“It must have been within the contemplation of the parties that it may not be actually used for long periods of time during peace. And if one accepted that, it would mean that for so long as there remained a prospect of the world breaking out into war, the property (even if it is derelict and abandoned for decades) could not revert to the municipality.”

He said: “I am not persuaded by this argument.”

The judgment confirms that our perseverance and vision are justified and brings to a finality another long walk of almost two decades.

“On that basis, and for no matter how long the army ponders on what to do with the site, or if ever to use it at some distant point in the future, it should lay vacant until the minister of defence and the secretary of defence decide otherwise.”

With regards to the claim that it was needed for accommodation and a hotel, Chetty said this was “vague and unsubstantiated by any evidence of the need or budget for such project”.

He said after considering all of the arguments raised, he could not to sustain a single one of those contended by the minister. He ordered the transfer of the property to the city to take place within 30 days and, following that, it must be transferred to Rinaldo.

Singh told TimesLIVE: “We are pleased to finally receive the judgment of the high court. The judgment confirms that our perseverance and vision are justified and brings to a finality another long walk of almost two decades.

“We are excited to now bring to reality the long-overdue and exciting opportunities that eThekwini Film City will generate for the creative community of the film, media, entertainment and tourism industries and other sectors of Durban and KZN.”

Police minister Bheki Cele has confirmed that soldiers will be deployed to help enforce lockdown rules on the Garden Route from Wednesday due to ...
News
1 year ago
Next Article