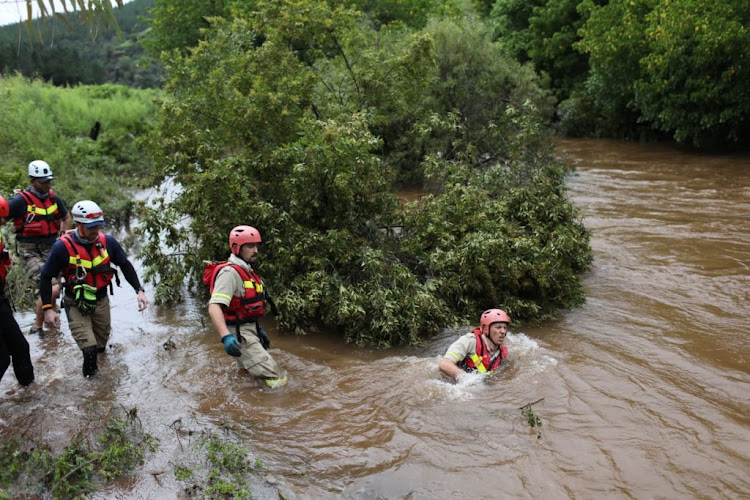 Rescue workers enter the Blyde River near Pilgrims Rest, Mpumalanga, to recover the body of a man who drowned in floods following tropical storm Eloise. The body of a one-year-old infant who washed away was also recovered in Mpumalanga on Tuesday.
Image: Alaister Russell/The Sunday Times

The body of a one-year-old infant who was swept from her mother’s arms as she tried to cross a flooded river in Badplaas, Mpumalanga, was recovered on Tuesday.

The province, along with Limpopo, has been hit by heavy rains and floods caused by tropical storm Eloise.

The storm, though downgraded in strength, has uprooted trees, damaged houses, caused floods and seen dams and rivers overflowing.

Reports from the police and rescuers at the scene in Badplaas indicate that the mother was trying to cross a flooded river when her daughter was swept from her arms.

A police officer, who cannot be named as he is not authorised to speak to the media, said the child’s body had been recovered further downstream.

The recovery comes hours after divers and search and rescue operators from the police, Off Road Rescue Unit and Rescue SA recovered the body of a man who drowned while trying to cross a river outside Pilgrims Rest.

On Sunday, the body of a five-year-old boy was recovered near Masoyi after he was swept away by flood waters.

On Sunday, the body of a five-year-old boy was recovered near Masoyi after he was swept away by flood waters.

At least twelve people have died across Mozambique since Cyclone Eloise hit the country's key port city of Beira on January 23 2021. On January 24 the cyclone weakened and headed inland to Zimbabwe, Eswatini and South Africa, leaving more flooding and damage in its wake.

'We could have died,' says Limpopo man after storm Eloise ravages village

The community of Luvhalani in the Vhembe district of Limpopo is picking up the pieces after tropical storm Eloise hit from Sunday morning.
News
1 year ago

More than 1,000 families have been displaced in the country by the storm and flooding which also hit Mozambique at the weekend and then moved inland. The storm has caused havoc, leaving 13 people dead and others displaced in Zimbabwe, Eswatini, Botswana and SA.

Dlamini-Zuma said heavy rains have battered a number of towns. Some floods cut off communities and local authorities are dealing with the damage, which includes destroyed buildings, she said.

Government teams are still on the ground assessing the extent of the damage.

She said the national disaster management centre was co-ordinating the operations with provincial authorities. KwaZulu-Natal Cogta MEC Sipho Hlomuka, who was also part of the briefing,  said teams were still doing assessments but confirmed a number of people have been affected.

He said there were also reports of two boys who were injured and taken to hospital.

Hlomuka said a further seven houses in uPhongolo municipality were destroyed while six others were partially destroyed.

Limpopo Cogta MEC Rodges Makamu said 78 families, mainly in the Vhembe district, have been displaced due to the collapse of their homes and flooding.

He said the province had experienced the collapse of bridges and even flooding of a police station in the Collins Chabane local municipality.

The death toll from storm Eloise rose to at least 13 on Monday after heavy winds, rain and flooding destroyed buildings, drowned crops and displaced ...
News
1 year ago

Police divers along with rescue operators from Rescue SA and Off Road Rescue Unit have recovered the body of a man swept away in flood waters in ...
News
1 year ago

Rescuers from Rescue SA and the police are to resume searching riverways around Pilgrims Rest, Mpumalanga, on Tuesday for a man who disappeared in ...
News
1 year ago
Next Article