In awe: Compassionate hospital staff who come to work despite Covid risk hailed

Denialists are a potentially harmful narrative 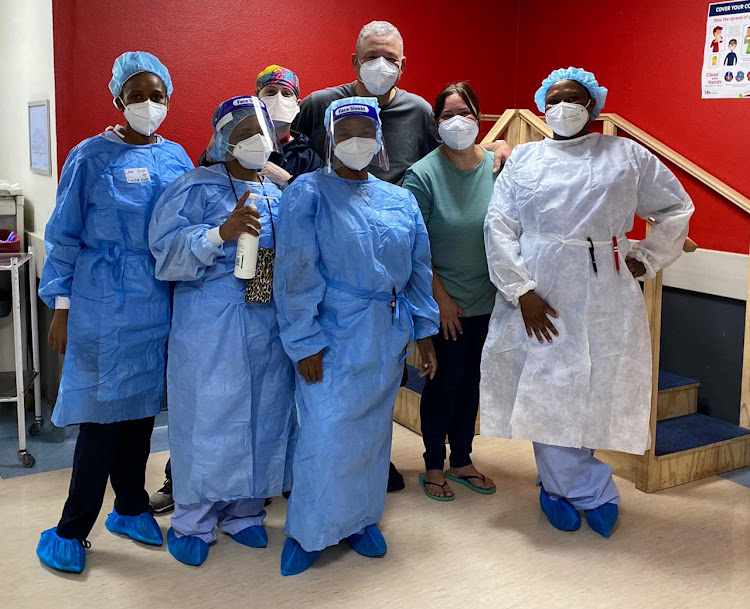 Denzil Taylor has thanked the medical team who helped him recover from Covid-19.
Image: Supplied

A towel over his head at 3.35am to prevent him seeing the chaos of a Covid-ravaged hospital. But Power FM’s Denzil Taylor knew he was one of the lucky ones as he was pushed through along a corridor of Flora Clinic in a wheelchair to a vacant bed.

“The doctor said, OK, we have a bed for you,” Taylor told TimesLIVE.

He had been waiting at a ‘Covid Point’ in an emergency ward, exhausted with all the classic symptoms of Covid-19, and asked himself how a bed had suddenly become available at that time. “There’s only one answer to that,” he said. Somebody must have died.

“They put a towel over me so that I couldn’t see my entry point (into the ward). They were wheeling me down the passages. They don’t want me in my state to visually see the scary sights,” said Taylor, who was stabilised on oxygen and recovered steadily over the next few days.

Veteran media personality and former government spokesman Denzil Taylor has shared his joy at being discharged from hospital after recovering from ...
News
9 months ago

He credits the hospital staff for his discharge on Sunday: “There is something else about these people that is just different and special,” he said.

“They don’t have Covid but they are in and out of that hospital every day. They deal with me for the whole day and then go home again to see their families. This is just something else.”

Taylor singled out the nursing staff for gentle and compassionate treatment: “No fear of me, no funny approach.”

Now back at home, Taylor also spoke of the emotional difficulty of getting sick simultaneously with his wife, who had to recover at home while he was in hospital.

“It becomes a mind game: the one at home is so concerned about the one is hospital. Meanwhile the one in hospital is getting the treatment and getting better and feeling guilty about that.”

He said his hospital experience had made him impatient with Covid-19 denialists in the social media space whose misinformation might be harmful.

“There is so much miscommunication and garbage — everybody can challenge everything, whether it is a medical term or something proven in science — it can be challenged by some guy with two Twitter followers, and then it spirals into something else. Then Bill Gates is in it, then the US government. Then a conspiracy by five guys wanting to run the world.

“And I’m lying in bed, I’ve got 'flu' symptoms here and am being helped by these people here. There is no Bill Gates here.

“We let it go, that is the worst part. We see this happening on social media. We laugh and giggle. But I’m telling you maybe we shouldn’t take some of this stuff — it goes and sticks somewhere,” Taylor said.