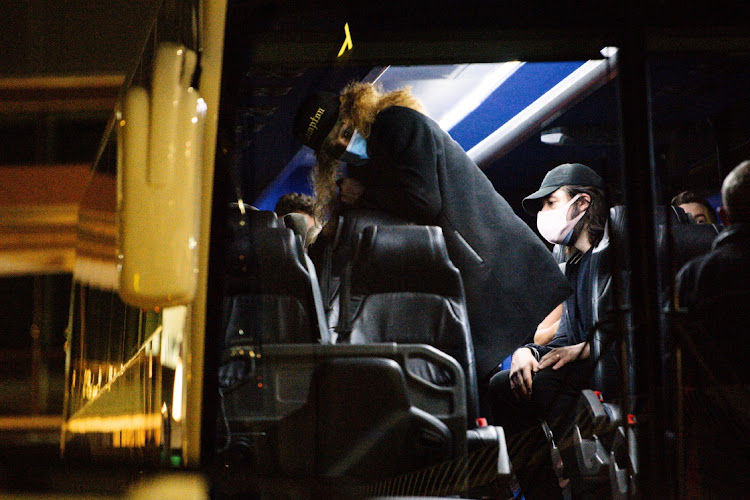 Serena Williams arrives at Adelaide Airport ahead of the Australian Open tennis tournament in Adelaide, Australia, on January 14, 2021.
Image: STRINGER

Two coronavirus infections were reported on Saturday on a flight to the Australian Open, forcing two weeks of strict hotel quarantine for all the tennis players and entourage on board.

The positive cases were recorded after the charter flight from Los Angeles landed in Melbourne for the tennis grand slam.

Health officials in Victoria state, where Melbourne is the capital, said an aircrew member and Australian Open participant who is not a player had been transferred to a health hotel following positive test results for the new coronavirus.

"The passengers who have been designated close contacts will be unable to access training and will undertake a standard 14-day quarantine period," a representative for Covid-19 Quarantine Victoria said.

In quarantine, players must train indoors, instead of being allowed out for five hours training per day, part of conditions that allowed the event to go ahead.

"Unfortunately we have been informed by the health authorities that two people on your flight AR7493 from LAX that arrived at 5.15am on Friday 15 January have returned positive Covid-19 PCR tests on arrival in Melbourne," said a message posted on Instagram by Mexico's Santiago Gonzalez, who is ranked 48 on the doubles circuit.

"From having 5 hours of training in a bubble to this ... (strict quarantine x 15 days). I will be showing you my workouts x Instagram (inside the room)," Uruguayan world number 68 Pablo Cuevas said on Twitter.

The news was first reported by The Age newspaper.

Australia has agreed to accept about 1,200 players, officials and staff on 15 flights for the major sporting event that is due to begin next month. Tennis officials were not immediately able to comment.

Other players cited by local media as likely to be on the flight included Tennys Sandgren, who was granted special permission to travel from Los Angeles late last week after testing positive for the new coronavirus, which he had previously had, and world 13 doubles player Victoria Azarenka of Belarus.

The inbound infections came as Australia recorded a single locally acquired case, and as states began to relax travel bans on signs an outbreak in the northern state of Queensland has been contained.

The case, in western Sydney, is thought to be linked a known cluster in New South Wales, the most populous state, health officials said.

Australia has halved the number of returning travellers that it will accept, to lower the risk of highly infectious strains seeping into the community, as occurred at a site in Queensland two weeks ago.

Emirates Airline said Friday it would suspend flights between Dubai and Melbourne, Sydney and Brisbane by early next week until further notice.

Queensland has recorded two weeks since its latest hotel outbreak, fuelling hopes the spread has been contained. As a result, Victoria and South Australia states will reopen borders to the state by Sunday.

Australia, which logged 20 infections hotel quarantine overnight, has been one of the world's most successful nations in managing the coronavirus spread, with about 28,700 infections and 909 deaths.

Formula One postponed the Australian and Chinese Grands Prix on Tuesday due to the COVID-19 pandemic, with Bahrain now set to open the season on ...
Sport
10 months ago

Top three men, women to quarantine in Adelaide ahead of Australian Open

Novak Djokovic and Rafa Nadal will be among top men and women players heading to Adelaide to serve their 14-day mandatory quarantine before ...
Sport
10 months ago
Next Article