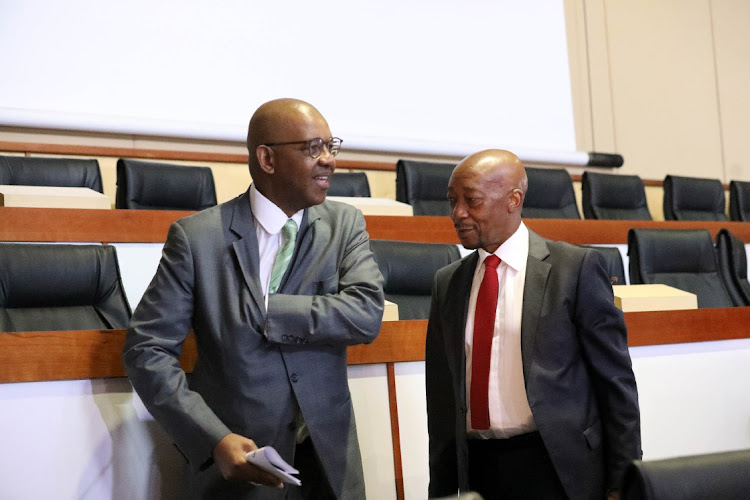 Petty jealousy, racism and arrogance were some of the accusations thrown at public enterprises minister Pravin Gordhan yesterday at the state capture commission of inquiry as his narrative of state capture was challenged during his cross-examination by former SA Revenue Services (Sars) boss Tom Moyane’s lawyer, Adv Dali Mpofu.

Mpofu was trying to knock cracks into the state capture evidence the minister presented to the commission in November last year.

Gordhan had told the commission that Moyane laid a criminal complaint against him to advance his own interests of state capture.

He accused Moyane of acting with malice when he took legal action against him for approving the early retirement of Sars deputy commissioner Ivan Pillay as he had been motivated by state capture.

Most of yesterday’s cross-examination seemed like a bad clash of personalities as both Mpofu and Gordhan spoke over each other on numerous occasions, leading to the minister raising objections with the chairperson of the commission, deputy chief justice Raymond Zondo, that he was not being allowed to finish his answers.

At one stage Gordhan referred to the Nugent commission report into Sars as a document that showed strong evidence of Moyane’s involvement in state capture, which led to Mpofu interjecting.

“If I were you I wouldn’t go to the Nugent commission,” Mpofu said.

On several occasions Gordhan asked either Mpofu or Zondo to afford him the opportunity to finish his answer, while Mpofu accused him of “rambling on and on”.

On numerous occasions Gordhan accused Mpofu of being “hard of hearing”.

Mpofu took exception to that and hit back. “You cannot say I'm hard of hearing. I’m not your child or one of the Africans you undermine.”

Mpofu said according to Moyane’s version, Gorhdan’s arrogance - as he thought highly of himself - petty jealousy and racism against Africans in general and Moyane in particular had led to their relationship becoming hostile.

Gorhdan had earlier agreed that his relationship with Moyane had turned hostile during his tenure as finance minister and while Moyane was Sars commissioner but emphasised that he had not known Moyane before his arrival at the revenue collector.

Mpofu said according to Moyane, there were five reasons why his relationship with Gordhan had soured.

Mpofu said Moyane believed that Gordhan was trying to hide and deflect from his own corruption and state capture and that the former commissioner had blown the whistle on the illegality and wrongdoing committed by Gordhan during his time at Sars, which included forming the so-called “rogue unit” and approving the early retirement of  Pillay.

Gordhan denied the allegations, saying he was non-racial and that his record of this spoke for itself.

“I deny any form of racism and racist behaviour,” Gordhan said in response.

“I emphatically deny those assertions... why do I have to be jealous of Mr Moyane?”

Mpofu accused Gordhan of making unfounded allegations of state capture against certain individuals, including Moyane, without having any proof. He asked if Gordhan had any evidence of former president Jacob Zuma or public protector Busisiwe Mkhwebane pursuing state capture.

Gordhan objected to answering the question, questioning its relevance. Mpofu charged: “You are just a witness, Mr Gordhan, just answer the question.”

“I'm here to account to [matters] in response to Mr Moyane,” Gordhan responded.

Mpofu asked if it made sense that Zuma, who is seen as a key player in state capture, would have appointed the likes of Gordhan and Nhlanhla Nene, who were supposedly opposed to state capture, to the key position of Treasury during the years in which state capture was happening.

Gordhan said the position of finance minister was one monitored by foreign finance lenders and rating agencies so it “was absolutely plausible” to appoint someone like Nene and himself.

“The appointment of Mr [Des] van Rooyen is a perfect example of the opposite,” Gordhan said.

Van Rooyen’s appointment was met with a fall in the rand value as the market reacted negatively to his appointment and forced Zuma to reshuffle him after just one weekend.

Mpofu also accused Gordhan of making allegations against Moyane of conspiring with the Hawks and the NPA around 2015 without any evidence but relying largely on rumours and innuendos.

Gordhan emphatically denied making any allegations without evidence. “There was a conspiracy at the time... At the time there were people with information that meetings took place in coffee shops... let me reflect and come back later,” Gordhan said.