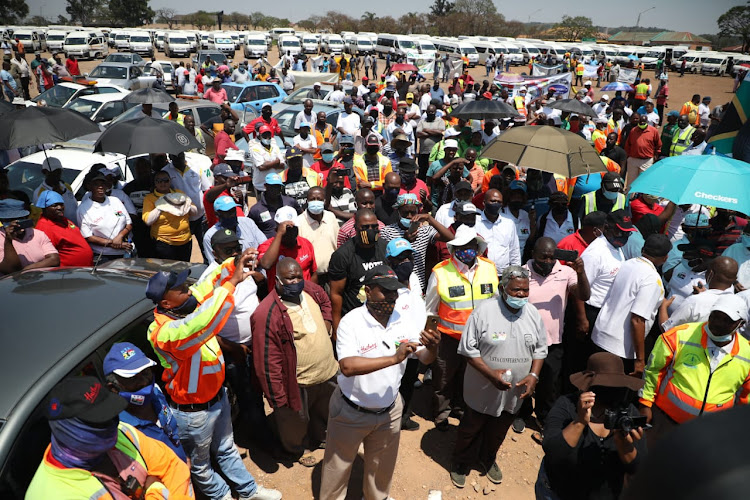 These were the scenes playing themselves out in Johannesburg on Wednesday morning after associations affiliated to the National Taxi Alliance (NTA) embarked on a strike.

The association is expected to deliver a memorandum of demands to transport minister Fikile Mbalula and President Cyril Ramaphosa over grievances related to the release of Covid-19 relief funds.

The Johannesburg Metro Police Department (JMPD) also reported obstructions on the N1 between Soweto and Midrand.

JMPD spokesperson Wayne Minnaar told Sowetan that taxi operators heading to Pretoria were blocking the highway and moving at a snail’s pace, obstructing other motorists.

“What we have observed is that taxi operators are moving at around 40km/h on the N1. They are also carrying knobkerries and intimidating motorcyclists and preventing them from passing,” said Minnaar.

Although commuters were aware of the strike, many said they did not have alternative transport.

Thousands of commuters have been left stranded in various parts of Gauteng due to a strike by the National Taxi Alliance.
News
1 year ago

Palesa Moloi, 34, who works in Randburg, said she did not have a choice but to try and find a taxi.

“My bosses didn’t want to understand that I would not be able to get to work. I can’t work from home because I am a cleaner, but I can’t get to work because there are no taxis,” Moloi said.

Siboniso Ntshangase, a construction worker, said he walked from Pimville to the Bara Taxi Rank in Diepkloof in the hope of catching a taxi to town but was left disappointed when he found the taxi rank empty.

“I get paid depending on my presence at work. If I don’t go to work, I lose out. I am disappointed by what happened today because my livelihood has been affected and now I have to go home because it’s late,” he said.

Dozens of commuters were seen on Chris Hani Road attempting to hike back home from the taxi rank.

The strike did not only affect commuters, but also had an impact on traders who make their living from selling items at taxi ranks.

Joyce Banda, who has been selling vegetables at the rank for 31 years, said she is worried by the lack of business brought on by the strike.

“On a normal day, I make about R300. I don’t think I’ll make anything today because there is nobody to sell to. I’m also concerned because my stock of vegetables will rot, which will add to the losses,” Banda said.

NTA spokesperson Theo Malele said it was regrettable they had to take drastic measures to be heard by the government.

He said they had given Mbalula an ultimatum to respond to grievances they brought to his attention in letters sent to him on August 26 and September 30.

“The National Taxi Alliance is aggrieved by the minister's refusal in affording it the freedom of association. Second, the failure to release the Covid-19 relief fund promised by both the minister and the president, for the benefit of the deserving taxi drivers and taxi operators,” said Malele.

Taxi operators are expected to assemble at the old Putco depot in Marabastad, Pretoria, and proceed first to the transport department and then to the Union Buildings.

Ramaphosa urges taxi sector to clean up its act

President Cyril Ramaphosa has called on the taxi industry to use its historic conference to end levels of lawlessness  and disrespect for women that ...
News
1 year ago
Next Article