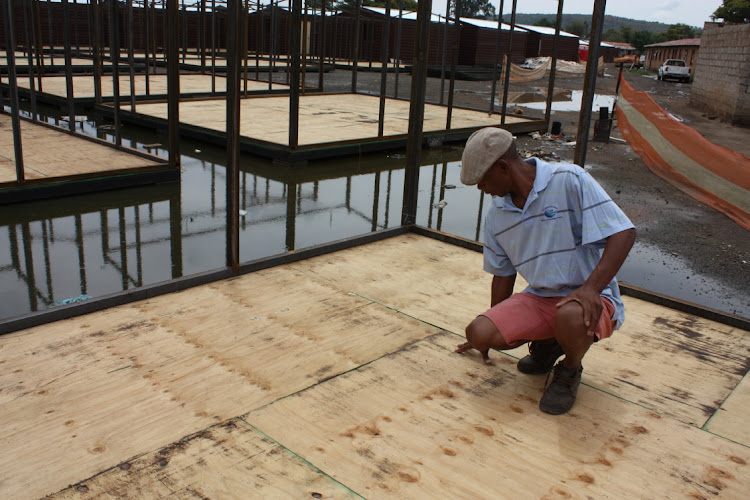 The multi-million rand temporary tin shack housing project meant to alleviate congestion in hostels and informal settlement in Limpopo and Gauteng has been marred by fresh controversy.

This time residents of Mamelodi, where the temporary housing units were built to reduce congestion at hostels, have raised alarm after the units were flooded during recent heavy rains, sparking fears of new defects.

The brown tin shack structures known as transitional residential units (TRU) initiated by the agency of the department of human settlements were meant to accommodate hostel dwellers and flood victims in order to curb the spread of Covid-19.

But now the housing project appears to be falling apart even before its intended beneficiaries are moved in. The temporary housing units in Mamelodi East were flooded, with some of them knee-high in water following heavy rains last week – sparking fears that they would get damaged before 1,000 families take occupancy.

Human settlements minister Lindiwe Sisulu visited the project in May this year and it was supposed to be completed in June but the initial deadline couldn't be met.

About 1,000 units were supposed to be built but construction is far from complete.

When Sowetan visited the temporary shacks on Friday, two days after it rained, most of them were flooded as they appear to have been built near a flood line. The wooden floors of the shacks were soaked in water for days, with some of the wood coming apart.

Marcus Letsiri, one of the possible beneficiaries, said:

"I have experience in building and what the company did is totally wrong – instead of levelling the place before putting the structure they balanced the wooden floor on bricks only."

Letsiri said the units were not safe for occupation due to poor workmanship.

"I want government to scrap this project because it has failed already and instead they should have upgraded the hostels," said Elias Rangwane, another hostel resident.

Sisulu's spokesperson Yonela Diko said the Mamelodi Hostel was one of the areas identified by the Human Settlements Coronavirus Council as highly congested, with a possibility of runaway Covid-19 infections as it had an average of eight to 10 people per room.

Diko said the challenge with the temporary structures was that they have not been well received by communities, partly because of being misunderstood as permanent residences instead of emergency interventions.

The agency of the department of human settlement tasked with driving the rollout of the controversial tin shack houses to vulnerable communities ...
News
1 year ago

"The minister asked the director-general to review all TRUs (including the Mamelodi one) – whether project specifications were met and whether the project has met its intended purpose – and that review is ongoing," said Diko.

In Talana in Limpopo, where similar structures were erected to house hostel dwellers and launched by premier Stan Mathabatha with a ribbon-cutting ceremony causing public outcry, residents told Sowetan of more structural defects.

According to residents, the brown shacks which cost  R2.4m were "worse than" those they lived in before as they were leaking when it rains.

Resident Celcia Monyela, who is using crutches to walk, said her belongings were drenched in water after the roof of her shack leaked and she was unable to remove them.

"These shacks are not good for people to stay in. Water was coming everywhere from the roof and I felt like the floor could break," she said.

"My shack, which I destroyed when I came this side, was better than this one, It didn't even have a single leak. The other day the door was unable to open and when I forced, it fell off."

About  40 structures were erected by the department of human settlements in an effort to encourage social distancing during the peak of Covid-19.

Another resident, Private Mohale, said his roof was also leaking and his family found it difficult to sleep in peace in the shack which has been connected to electricity illegally.

"It is too hot inside this shack, day and night is the same. The government said to us that these shacks can reduce heat and become habitable, and they lied to us because we are are burning inside," he said.

Mohale said he had no choice but to connect electricity illegally across the road in order switch on his appliances.

Yesterday, as temperatures hit 38 degree celsius in Tzaneen,  residents of Talana had opened doors and windows in an effort to keep cool in the heating zinc structure. The outside toilets used by residents are falling into disrepair with broken door handles broken and wire used to lock them.

Limpopo department of human settlements spokesperson Motupa Selomo said the issue of Talana has been referred to the Special Investigating Unit and the Hawks for investigations.

Noma Sozwe spent most of Sunday rebuilding her daughters' two shacks after the structures were demolished by a group of people who wanted to occupy ...
News
1 year ago
Next Article