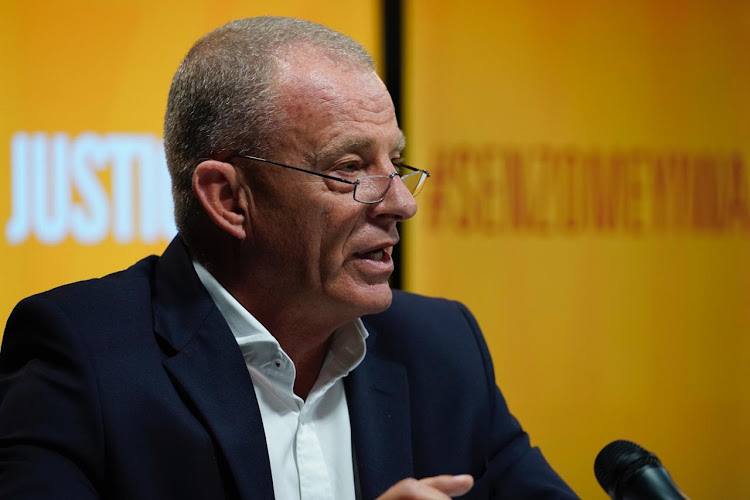 Five people are in police custody and will appear in court on Tuesday for the murder of former Bafana Bafana captain Senzo Meyiwa — but none is the “mastermind” behind the former goalkeeper's murder.

AfriForum's head of private prosecutions, advocate Gerrie Nel, made this claim at a media briefing on Monday. He was seated alongside Senzo's brother, Sifiso Meyiwa, who said that they believed they knew who the mastermind was.

Nel applauded the arrests, but expressed disappointment at the lack of an arrest of a “mastermind”.

While it remained unclear why Meyiwa was killed, Nel confirmed it was not a botched home invasion.

“We have been briefed to say this was not a robbery gone wrong. This was an assassination. So the one outstanding aspect here, and we are disappointed it hasn't happened yet, is to address the mastermind — because if there's a hit, there's a mastermind,” said Nel.

The family of slain Orlando Pirates goalkeeper Senzo Meyiwa are preparing themselves as the circumstances that led to his murder look set to finally ...
News
1 year ago

He said he was confident the police had a strong case, based on the information AfriForum received from various people and agencies involved. He added that AfriForum was committed to helping the police catch the mastermind.

Sifiso said the family was still in shock.

“I am still in shock at what I am hearing ... though we are grateful, we remain anxious that the mastermind has not been arrested. We remain hopeful that more arrests will follow,” he said.

Asked if he and AfriForum agreed on who the mastermind behind the killing was, he said: “Yes, we're in agreement.”

The five suspects are to appear in the Boksburg magistrate's court on Tuesday morning.

Nel was understandably cagey when asked about the identities of the five men, specifically when asked if any of them were in the house when Senzo was shot. He said this would all become clear during the court case — where the investigator would reveal their individual involvement and how police cracked the case.

Nel said the National Prosecuting Authority (NPA) had done all the “preparatory” work in connection with the case, and said it was likely the matter would be moved to the high court, hopefully within “a month or two”.

“The evidence we have been briefed on, we are happy with,” he said.

Nel said he would be interested in prosecuting the case, but was adamant that this would be done by the NPA as it was not a private prosecution.

AfriForum said its involvement in the matter had been fruitful.

“We feel fairly confident that our involvement, change of the [police investigating] team, and the movement of the case from one office to another, put a new focus on the investigation and allowed people to just focus on the evidence and to move the case forward,” said Nel.

Sifiso said he was ready to face the people who allegedly killed his brother.

He, however, added that “there is still a long way to go”.