Teachers, nurses and doctors are expected to join one-day walkout 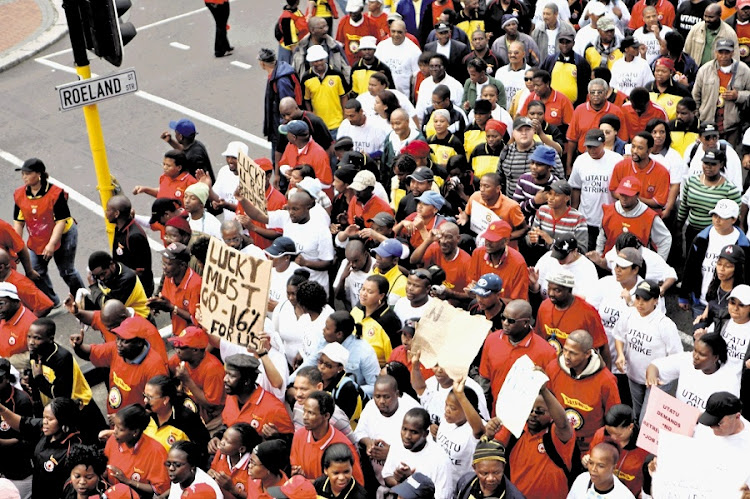 Services such as health care and education are expected to be disrupted on Wednesday as public sector workers down tools and stay at home to protest against the government’s failure to implement wage increases.

Union leaders in three of the largest federations, Cosatu, Fedusa and the National Council of Trade Unions, have been on a collision course with the government after it backed out of a pay increase deal following finance minister Tito Mboweni’s huge budget cuts to contain rising government debt and a ballooning budget deficit.

Teachers, nurses and doctors are expected to join other public servants in the one-day walkout that comes at an inopportune time for the SA economy, which was ravaged in the second quarter by lockdown measures to fight the Covid-19 pandemic.

“We are calling on workers to embark on a stayaway on Wednesday. There are no workers who have been exempted. We have been making a call to workers that they should, as a way of protest, stay home on Wednesday,” said Cosatu general secretary Bheki Ntshalintshali.

The strike is also supported by the National Union of Metalworkers of SA (Numsa), the main Eskom union. However, Eskom said it did not envisage any disruptions to business operations.

“It should be noted that the generation, distribution and transmission of electricity are designated as essential services,” the company said on Tuesday.

“Consequently, all Eskom employees are part of an essential service and are therefore not permitted to participate in the planned protest actions or in the stayaway.”

Eskom said it does have contingency plans, which it did not divulge.

Implementing the wage agreement for 1.3m public servants will cost the government R37.8bn, but it cannot raise the debt to pay for it. The matter remains subject to arbitration and court proceedings.

Cas Coovadia, CEO of Business Unity SA, a lobby group for some of SA’s biggest corporate names, said the industrial action will undermine efforts to save jobs and revive the economy.

“This strike will have a significant economic impact at a time when the economy is already on its knees,” he said.

The strike plans include socially distanced marches in all major cities. Other grievances to be highlighted include corruption, inequality and job losses.

President of the Young Nurses Indaba Trade Union, Lerato Madumo-Gova, said health-care workers, who have been on the frontline of the fight against Covid-19, will take part.

“We are going to occupy health departments in all the provinces because of the monumental corruption that’s taken place over the procurement of personal protective equipment,” Madumo-Gova said.

Gautrain workers will go on strike on Monday: Numsa

Gautrain workers affiliated to the National Union of Metalworkers of SA (Numsa) will go on strike from Monday.
News
1 year ago

The actions of staff who embarked on a strike in May 2018 were tantamount to a human rights violation as they denied a considerable number of ...
News
1 year ago
Next Article