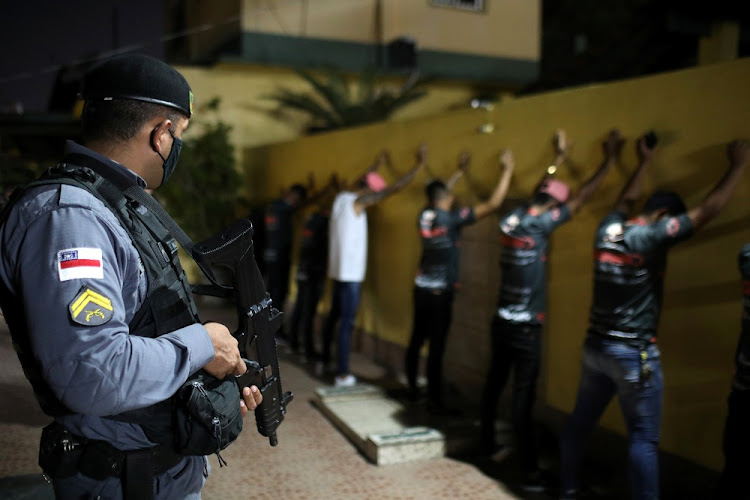 A police officer checks people during an operation against a clandestine party, amid the coronavirus disease (Covid-19) outbreak in Manaus, Brazil, September 25, 2020.
Image: REUTERS/Bruno Kelly

The largest city in Brazil's Amazon has closed bars and river beaches to contain a fresh surge of coronavirus cases, a trend that may dash theories that Manaus was one of the world's first places to reach collective, or herd, immunity.

When a large portion of a community becomes immune to a disease, its spread becomes unlikely.

University of Sao Paulo researchers suggested that a drastic fall in Covid-19 deaths in Manaus pointed to collective immunity at work, but they also believe that antibodies to the disease after infection may not last more than a few months.

Local authorities on Friday enforced a 30-day ban on parties and other gatherings, and restricted restaurant and shopping hours, a setback for the city of 1.8 million after the worst of the pandemic seemed to be behind them.

In April and May, so many Manaus residents were dying from Covid-19 that its hospitals collapsed and cemeteries could not dig graves fast enough. The city never imposed a full lockdown. Non-essential businesses were closed but many simply ignored social distancing guidelines.

Global coronavirus cases surged past 25 million on Sunday, according to a Reuters tally, as India marked a worldwide record for daily new cases in ...
News
1 year ago

Then in June, deaths unexpectedly plummeted. Public health experts wondered whether so many residents had caught the virus that it had run out of new people to infect.

Research posted last week to medRxiv, a website distributing unpublished papers on health science, estimated that 44% to 66% of the Manaus population was infected between the peak in mid-May and August.

The study by the University of Sao Paulo's Institute of Tropical Medicine tested newly donated banked blood for antibodies to the virus and used a mathematical model to estimate contagion levels. The high infection rate suggested that herd immunity led to the dramatic drop in cases and deaths, the study said.

Daily burials and cremations fell from a peak of 277 on May 1 to just 45 in mid-September, according to the mayor's office. The Covid-19 death toll that officially peaked at 60 on April 30 dropped to just two or three a day by the end of August.

Now the numbers are on the rise again.

The study's lead researcher, Ester Sabino, declined to be interviewed for this article because the Manaus herd immunity study awaits peer review for publication.

Authorities warned Manaus residents they were ignoring the virus and risked a second wave of contagion by not wearing masks, packing into bars and attending parties. They shut down Manaus' river beachfront where raves were being held.

Manaus Mayor Arthur Virgilio blamed right-wing President Jair Bolsonaro, who has minimized the gravity of the pandemic, for encouraging a return to normal life and work instead of waiting for a vaccine to be developed.

"The government must take this seriously and speak the truth. If it says there is no problem, that encourages people to ignore our decrees," the mayor told Reuters in an interview.

Epidemiologist Dr. André Patricio Almeida, of the Adventist Hospital of Manaus, said cases are rising again mostly among younger, wealthier people who go to bars who show milder symptoms but often infect older relatives who need to be treated in hospital.

Almeida said too little is known about Covid-19 and whether re-infection is possible to verify if herd immunity was reached in Manaus, but some short-lived immunity probably had been attained.

"There could be immunity that does not last for long," Mayor Virgilio agreed.

The Sao Paulo University study said coronavirus antibodies appeared to wane after just a few months, which could explain the resurgence in Manaus.

"Something that became evident in our study - and that is also being shown by other groups - is that antibodies against SARS-CoV-2 decay quickly, a few months after infection," one of its authors, Leis Buss, said in a statement by the São Paulo research foundation FAPESP that accompanied the paper.

"This is clearly occurring in Manaus," Buss said.

SA has dropped to 10th position on the Worldometers ranking of countries affected by the coronavirus pandemic.
News
1 year ago

Lockdown blues: here's what is still not allowed on level 1

Here's what is still not allowed or illegal during lockdown level 1.
News
1 year ago
Next Article