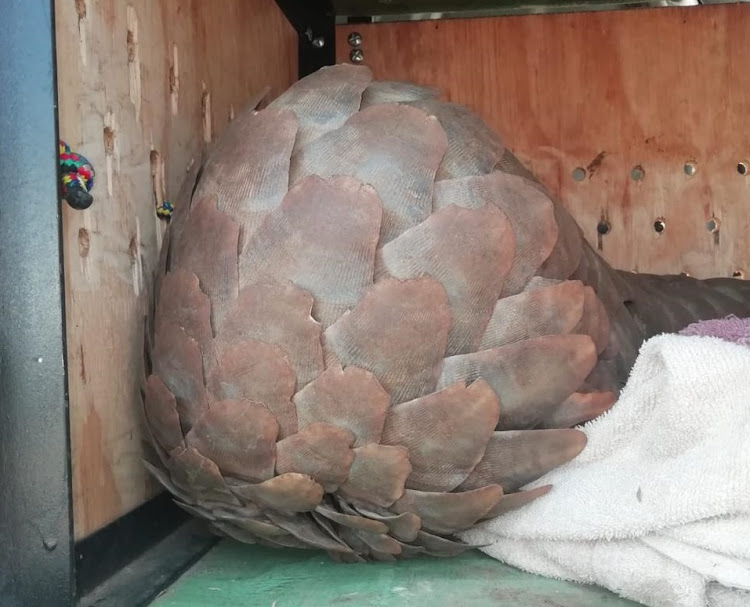 Law-enforcement officials conducting a routine search arrested two men allegedly in possession of a pangolin, one of the world's most poached animals.
Image: SAPS

Two suspects have been arrested after they were found in possession of an endangered pangolin, police said on Monday.

National police spokesperson Col Athlenda Mathe said members of the rapid rail policing unit from Gauteng North and Limpopo and soldiers were conducting routine vehicle searches in Komatipoort when they discovered the animal.

The team had stopped and searched a taxi in which two foreign nationals were found to be in possession of the endangered species, Mathe said.

Further investigation revealed the pair was in the country illegally.

They are expected to appear in the Komatipoort magistrate’s court on Tuesday.

Pangolins are among the world's most illegally trafficked land mammals. From SA they are often sold in China, to be eaten as delicacies and used in traditional medical elixirs.

Six suspects to appear in court for dealing in a pangolin

Six suspects are expected to appear in the Alexandra magistrate’s court in northern Johannesburg on Monday after they were arrested in a sting ...
News
2 years ago

Man in possession of endangered pangolin arrested in Swartwater area

A man who was arrested after  he was allegedly found in possession of a pangolin in the Swartwater area in Limpopo is expected to appear in the ...
News
2 years ago
Next Article